Key Difference: Asus has announced the launch of newest phablet, the Asus Fonepad. The Fonepad is a 7-inch Android tablet that allows users to also make phone calls by placing the device on their ear. The phablet sports a 7-inch IPS LED backlit touch screen that allowed multitouch capability for up to 10 people. The screen has a resolution of 1280 x 800, which provides approximately 216 ppi density, a decent enough resolution. The Galaxy Note 10.1 is a tablet computer designed and manufactured by Samsung. It features a 10.1-inch screen and is marketed as a platform for multimedia consumption including movies, music, and web browsing. The Note 10.1 also features the use of a stylus named the S-Pen. The Note 10.1 runs on Android 4.0.

Tablets are mainly used for multimedia, watching videos, reading e-books, and surfing the internet. They feature a full virtual keyboard which is useful for online chatting, social networking and sending emails. Tablets also tend to have dual cameras, which can be used to take pictures, while the front facing camera can be used for video chatting and video calling. Basically, tablets are like a mini computer. They are able to perform most tasks that one uses a laptop for, such as surf the net, take pictures, chat with friends, send and receive emails, as well as use it as an e-Book reader. One can also use a tablet for basic computing functions, watching videos and listening to MP3 songs on the internet. Also, tablets are much more portable and lightweight than most laptops, notebooks or netbooks. 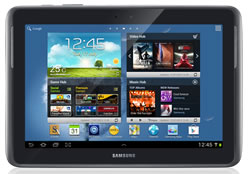 The information for the detailed table about the two phones has been taken from the Asus website, trustedreviews.com, pcworld.idg.com.au and GSMArena.com.