Difference between CTBT and NPT

Key Difference: The world is trying to control chemical and nuclear weapons. CTBT, which stands for Comprehensive Test Ban Treaty, is a treaty which is to ban all nuclear explosions in all surroundings. NPT stands for Non-Proliferation Treaty, whose aim is to prevent nuclear weapons for peaceful uses of nuclear energy. 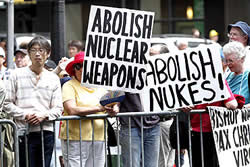 Comprehensive Test Ban Treaty (CTBT) was opened for signature in 1996. It is intended to prohibit all nuclear weapon test explosions. Till date, nearby 1900 nuclear tests have been carried out at different locations all over the world. CTBT was floated by the former American President Bill Clinton. The treaty was adopted by the United Nations General Assembly on 10 September 1996. However, the treaty has not been put into effect as either countries have yet to ratify the treaty. These countries are: China, Egypt, India, Iran, Israel, North Korea, Pakistan, United States.

Since the early 1950s, the adaptation of banning all the nuclear explosions are going on until now , but for so many years they were not banned. In fact, so many new explosions came into existence. Indian Prime Minister Jawaharlal Nehru also signed to ban all nuclear test explosions all over the world, however, with the circumstance of Cold War, nobody bothered about the agreement.

Then, in 1963, Partial Test Ban Treaty came into existence, which banned nuclear tests in the atmosphere, underwater and in space, but not underground. In 1991, little progress was made until the end of the Cold War. Under Article 1, the basic obligations of CTBT are:

Though after few years, US signed the treaty, but they did not approve it. Also, seven other countries did not ratify the treaty.  There is ongoing debate whether or not the CTBT should be approved.

Nuclear weapon States Parties are also compelled, under Article VI, to "pursue negotiations in good faith on effective measures relating to cessation of the nuclear arms race at an early date and to nuclear disarmament, and on a treaty on general and complete disarmament under strict and effective international control."

The NPT aims to prevent the spread of nuclear weapons and weapons technology, to promote the peaceful uses of nuclear energy, and to further the goal of disarmament. The Treaty establishes a safeguard system under the responsibility of the IAEA, which also plays a central role under the Treaty, in areas of technology transfer for peaceful purposes.