Difference Between Cyclone and Hurricane

Key Difference: A hurricane is also called a tropical cyclone, making it a type of cyclone. A cyclone and a hurricane only have a few differences. A hurricane is most commonly found in tropical zones, over warm waters in the Atlantic and Pacific Ocean, while cyclones are found in the Southern Pacific Ocean and the Indian Ocean.

A hurricane is tropical cyclone, which is a type of cyclone. In this manner, a hurricane is not so different from a cyclone. Let’s look at the definition of a cyclone to understand it better.

Depending on the size and intensity of the cyclone, wind speed can range anywhere from 32mph to 157mph. Different types of cyclones include extratropical, subtropical, and tropical; cyclones can transition between these phases given the right conditions. Cyclones are considered to be as oceanic phenomena, as they can die out on lands due to loss of moisture, but they still manage to cause massive destruction due to wind and rain. A cyclone has a diameter on the scale of hundreds of kilometers and is comprised of several to dozens of convective storms. 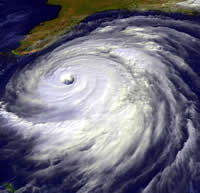 A hurricane is a tropical cyclone that has very similar conditions to a cyclone, except it is found in tropical places. A hurricane is characterized by thunderstorms, strong winds and heavy rains. A hurricane needs a warm area to develop and cannot exist in cold areas; hence they are most common in tropical areas. Places were hurricanes can most commonly be found are over warm waters in the Atlantic and Pacific Ocean. The center of a hurricane is also referred to as the ‘eye’ of the hurricane, while it is surrounded by strong winds and rain, called as the ‘eye wall’. The eye is warmer compared to the rest of the surroundings.

Both, cyclones and hurricanes can be determined using Pulse-Doppler radars and their strength can be measured using scales such as the Beaufort scale and Saffir-Simpson scale, though scales may differ according to countries.