Difference between Neutron Star and Pulsar

Key Difference: Neutron stars are the collapsed cores of some massive stars, that are created during supernova explosions. Pulsar is a rotating neutron star, that is highly magnetized and it emits regular pulses of electromagnetic radiation.

Celestial objects always create curiosity. Scientists and astronomers are always trying to know the unknown. We all are aware that this fascinating world comprises of many celestial objects. Neutron star is one of them. Many people confuse  a pulsar with a neutron star. However, a pulsar is a type of neuron star. Thus, all pulsars are neutron stars but all neutron stars are not pulsars. 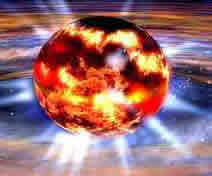 Neutron stars are the collapsed cores of some massive stars, created during supernova explosions. A pulsar is a neutron star that spins rapidly and emits radio pulses at regular intervals.

Neutron stars are the burnt out stars and they do not glow.  During the burn out, the inside core of the star collapses and meshes the protons with electrons. This leads to the generation of the electron-proton pairs and finally into the neutrons. Thus, they are named as neutron stars. They are only 10-15 km in terms of radius. They are very fascinating as they are considered as one of the densest object that is known to mankind. The extreme force of gravity inside a neutron star makes its shell extremely smooth and shiny. You can imagine its massiveness, as it is more than the Sun. These stars can be observed sometimes.

Some of the characteristics of a neutron star are listed below:-

A neutron star is formed by utilizing all its source of internal energy generation. Thus with time, its rotation slows down and also effects the magnetic fields. And eventually it becomes invisible.

Pulsar is a rotating neutron star, that is highly magnetized and it emits a beam of electromagnetic radiation. Actually, when the neutron star is spinning, then it emits these radiations that are detected only when they are pointed towards the Earth. Now as it spins, these emissions point on the Earth at the periodic intervals.

These radio waves are in the form of pulses that take states on and off. Pulsars do not emit rays with alternate on and off states, but on the Earth they seem to be changing states on 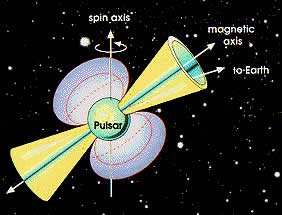 and off, due to the spinning motion of the pulsars. The time between pulses for a pulsar might be about 1 second. Others may also have smaller times, even about 1 millisecond. The actual pulses are smaller in length than the time between the pulses.

Thus, a neutron star is a collapsed core of a massive star. A pulsar is a rotating neutron star with a very intense magnetic field. The rotating pulsar emits beam of radiation at the magnetic poles.