Difference between Oats and Rolled Oats

Key Difference: Avena sativa or oats is a species of cereal grain that is grown for its seed, also known with the same name. Rolled oats are oat groats that are flattened using steel rollers in a mill and then pre-steamed, toasted before being packaged.

Oats have become a popular breakfast grain due to their many healthy properties. With the shift towards healthy living, almost everyone has either heard of oats or has incorporated oats into their diet. There are various different types that oats have been launched into the market, which causes a lot of confusion. There is oats, rolled oats, quick oats, instant oats, etc. Worry not, these are all types of oats, but they are just milled, packaged and sold differently. 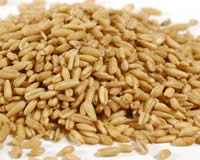 Oats has various uses in addition to being used as a breakfast cereal. Oats were originally used as livestock feed and were a part of a daily diet of domestic horses, cattle and chickens. It is also used in some brands of dog and cat food. Oats are also known as cat grass, as cats enjoy eating tender young oats. Oats can also be grinded into flour, which can be used in porridge, oatcakes, oatmeal cookies, and oat bread. Oats are also used in muesli (breakfast dish) and granola bars. In some European countries, oats are used for brewing beer. Oats can also used as horse or cattle bedding, as it is soft, dust-free and has an absorbent nature. Oats are also known to soothe skin conditions and are found in a few cosmetics, as well as used for medicinal purposes.

Rolled oats are the type of oats that are most commonly found and sold in the market.  These are oat groats that are flattened using steel rollers in a mill and then pre-steamed, toasted. The resulting flattened grain is packaged and sold. The famous Quaker Oats breakfast is made up of rolled oats. Rolled oats are also classified into two different types: thick-rolled and thin-rolled. Thick-rolled are slightly thicker in size and take a little while to cook, while the thin-rolled are thinner in size and cook relatively faster. 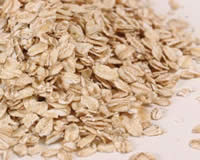 Rolled oats can also be used to refer to the old-fashion oatmeal or oat flakes that are commonly found as a breakfast dish. Rolled oats are also used to make granola bars and cookies. Rolled oats can also be powered and be sold as oats flour, which are used to make cookies, muffins and various other baked goods. The finer oats powder is also often used as baby food, in order to get the baby started on some type of solid food.

Oats, in any form, are a very healthy food and are an excellent source of thiamine, iron, and dietary fiber. Whole oats are also the only source of antioxidant compounds known as avenanthramides, which are believed to help protect the circulatory system from arteriosclerosis. Oats also play an important part in lowering cholesterol levels in the body, preventing heart failure, enhancing the immune system, stabilizing blood sugar, lower risk of Type 2 Diabetes, etc.