Difference between Falafel and Hummus

Key difference: Falafel and Hummus are both Middle Eastern foods prepared using Chickpeas as their prime ingredient. The difference between them is that Hummus is a ground paste of select chickpeas combined with olive oil, spices and herbs. Whereas Falafel means a deep fried ball made of ground chickpeas. 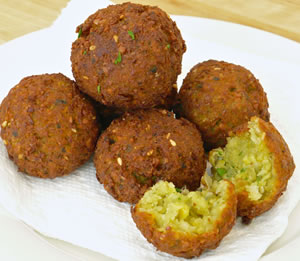 Middle Eastern food is popular for its distinct flavor, method of preparation and its presentation. People all over the world have liked and taken to food originating in this part of the world. Falafel and Hummus are two delicacies that are like the torchbearers of this rapidly expanding food revolution. One of the most prominent reasons why these two delicacies are considered the same is because of the presence of a major ingredient in both of them, which is the chickpeas. Regardless, once a person knows all the ingredients going into these snacks and the modus operandi adopted for their preparation, the distinction would be clearly evident.

Falafel is a patty or deep fried ball made of ground chickpeas, fava beans or both. Chickpeas used for making falafels are not cooked, as they may cause the falafels to fall apart. However, in case of fava beans, cooking them beforehand becomes necessary for medical reasons. Usually, to make falafels, chickpeas are soaked overnight, along with baking soda at times. The next morning, they are ground together with ingredients such as parsley, scallions, and garlic. If fava beans have been used for making falafels, spices like cumin and coriander are added to them while they’re being ground, to derive a unique flavor. The resultant paste is then shaped into balls or patties by using a bit of flour, which acts as a binder to the falafel balls. The balls are then deep fried or oven baked to form crispy and crusty falafels.

Hummus is similar to falafel because it too is a snack that is prepared by grounding a set of select chickpeas. However, the chickpeas are cooked before being ground to make hummus. The derived paste is then blended with a variety of ingredients such as tahini, olive oil, lemon juice, salt and garlic. Hummus is known to be a very nutritious and health promoting food. The delicacy is high in iron and vitamin C, and also has significant amounts of folate and vitamin B6. It is also useful while dieting and observance of strictly vegan or vegetarian diets. Hummus is garnished with an eclectic mix of accompaniments such as chopped tomato, cucumber, coriander, parsley, caramelized onions, sautéed mushrooms, whole chickpeas, olive oil, hard-boiled eggs, paprika, sumac, ful, olives, pickles and pine nuts, etc. 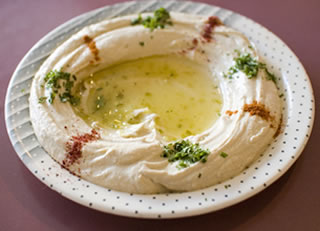 Another notable and probably similar feature of these two dishes is that they both can be well complemented by bread. The type of bread that is most associated with these two delicacies is the pita bread. The pita is a typical Middle Eastern flatbread that is cut into half or two-thirds to expose a pocket within for filling up with falafels, vegetables, sauces, etc. As for hummus, the pita bread is cut into small equal portions to use for dipping in hummus. Sometimes, hummus is also served as an accompaniment to falafels among other items.

Therefore, falafel and hummus are similarly derived, but do not exactly constitute the same ingredients. Their preparation and presentation differ from each other as well.

Comparison between Falafel and Hummus: