Difference between Preschool and Kindergarten

Key Difference: A preschool refers to an educational institution that has been designed for children between the infancy and age of formal school education. Kindergarten is a type of preschool for children from three to five years of age. In some places, it denotes the first year of schooling and focuses on five year old children. However, the usage of terms varies from country to country. 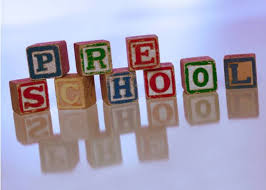 A preschool denotes any type of an educational institution that prepares a child for a formal education system. A preschool does not specify any particular type of institution. In order to be a preschool, the school must provide elementary education to children. They basically provide care and education for children below the statutory age.

One of the important benefits of a preschool includes the development of social skills within the children. Children develop language and vocabulary skills. Functional hours of a preschool may vary from one another. Preschools also focus on nurturing the imagination and creativity of a child.

Kindergarten means a garden for children. This term was invented by Friedrich Froebel, who established the very first kindergarten program in Germany in 1837. He emphasized the importance of play in a child's life. He considered games as a prime contributor to the intellectual, social and spiritual development of the children. It is a type of preschool. However, some schools provide formal education integrated with the kindergarten classes.

Comparison between Preschool and Kindergarten: