Difference between Cognac and Armagnac

Key Difference: Cognac is actually a type of brandy that has been distilled in the town of Cognac in France. Brandy is produced in the wine-growing region surrounding Cognac. Cognac is distilled in Charentais copper pot stills until they are a colorless spirit of about 70% alcohol. Armagnac is a type of brandy that is produced in the in the Armagnac region in Gascony, southwest France. Armagnac is traditionally distilled in column stills once at 52% alcohol, which gives is more flavor and taste compared to the cognac.

Cognac and Armagnac often confuse people that are not alcohol enthusiasts. They are often confused to the same thing as they are both brandy. True they are similar in nature and both are different types of brandy. However, they are produced in two different places and are made using different processes. They also differ in terms of flavor and taste.

Cognac is actually a type of brandy that has been distilled in the town of Cognac in France. Brandy is produced in the wine-growing region surrounding Cognac. There are only a few authorized regions that are allowed to make cognac and these regions have been divided into six zones or crus: Grande Champagne, Petite Champagne, Borderies, Fins Bois, Bon Bois and finally Bois Ordinaire.

Once the grapes have been pressed, they are added with yeast and left to ferment for a couple of weeks. The wine is then distilled using traditionally shaped Charentais copper pot stills until they are a colorless spirit of about 70% alcohol. The distilled spirit is then aged for at least two years in French oak barrels from Limousin or Tronçais. In the oak barrels, the alcohol and the water start evaporating about 3% a year. The alcohol reaches the required 40 ABV by four or five decades. However, the alcohol can also be removed early and diluted with water to reach the same ABV. After four or five decades, the cognac can then be transferred to large glass carboys known as bonbonnes for blending purposes. 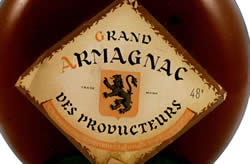 Armagnac is a type of brandy that is produced in the in the Armagnac region in Gascony, southwest France. It is one of the oldest brandies that have been produced in the world. Armagnac is one of the first areas that started distilling spirits, but produces smaller volumes compared to Cognac. Hence, it is not so well known outside of Europe but it has recently started gaining popularity with brandy lovers everywhere. It was originally produced and marketed as claiming to have 40 virtues.

The Armagnac region lies between the Adour and Garonne rivers in the foothills of the Pyrenees. Governing authorities, The INAO and the Bureau National Interprofessionel de l'Armagnac (BNIA), has authorized ten different varieties of Armagnac grapes that can be used for production. The four most commonly used are Baco 22A, Colombard, Folle Blanche and Ugni Blanc. The grapes are which gives the Armagnac its flavor and the aroma.

Armagnac is traditionally distilled in column stills once at 52% alcohol, which gives is more flavor and taste compared to the cognac. The alcohol is then aged for long periods of time in oak barrels. The aging gives the Armagnac more powerful and complex flavors, along with softening its taste. Once the Armagnac has matured, it is then transferred to glass bottles for storage. Armagnac is generally not diluted with water or other drinks and is not added with flavor or color enhancers that are usually found in other brandies.

Armagnac is sold blended with several other armagnacs and the age on the bottle refers to the age of the youngest Armagnac. The bottle is marked with A three star or ‘VS (very special)’ to state that the drink has been aged for at least two years. ‘VSOP’ is aged five years, ‘XO’ is aged six years and ‘Hors d'âge’ means that the youngest component is at least ten years old.