Difference between Keto and Atkins Diet

Key Difference: The main different between the two diets is that Keto focuses on reducing carbs drastically until the goal weight is reached or for lifetime, while Atkins reduces carbs until a certain weight is reached and then gradually increasing it. Keto was also designed as a lifestyle for people who suffer from epilepsy and Atkins was designed to help reduce weight.

Diets aren’t really a recent fad; they’ve been a trend for many years. The success of diets is often up for debates with many people arguing how diets have either helped them or hindered them. However, the only thing that is constant is that the popularity of different diets has not declined - it has only risen. With the number of different diets on the market, it can often be confusing what diet comes with what set of rules and which one is the right diet for you.

Two of the most popular diets that are currently on the market are the Keto Diet and the Atkins Diet. Both of these diets are similar but also different from each other especially when it comes to purpose. Although, these days both the diets are used for the purpose of losing weight, each diet goes about doing that a little differently.

Let’s first look at the Keto diet, which is a short form for Ketogenic Diet. The diet works by limiting the intake of carbohydrates in the body, which puts the body in a state of Ketosis. This state basically forces the body to burn fat, instead of the glucose that is created by carbohydrates. Due to the low amount of carbs, the liver then focuses on converting fat into fatty acids and ketone bodies. It usually takes about 3-6 weeks for the body to make the transition to running on fat. The diet is compiled of a meal that is made up of 70% fat, 25% protein, and 5% carbohydrates.

The diet is actually pretty old and can be dated back to 500 BC, where it was first noted that cutting out significant foods can have an effect on the brain, more towards people who suffer from seizures. Fast forward to early 1920s, where more research showed that cutting carbs can help reduce seizures in people who suffer from them, more effectively than medicine. However, it also resulted in losing weight, which is why it then became more popular as a weight loss diet rather than one that helps curb seizures. But if not done correctly, the keto diet can cause dizziness, stress on kidneys, as well as kidney stones.

The Atkins diet was created by Cardiologist and Nutritionist, Robert Atkins sometime in the late 1960s. The diet focuses on a similar approach to carbohydrates, suggesting a low-carb diet and adding more fat and protein can overall help the body reach the state of ketosis and reduce fat. The diet borrows this method from the Keto diet, however it differs because it comes in stages, where gradually you are supposed to increase the introduction of carbs back into your diet. 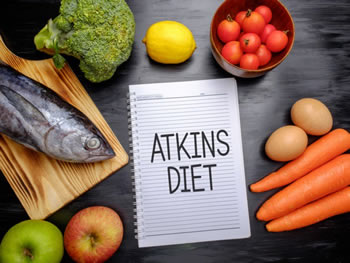 The main different between the two diets is that Keto focuses on reducing carbs drastically until goal weight is reached or for lifetime, while Atkins reduces carbs until a certain weight is reached and then gradually increasing it. Keto was also designed as a lifestyle for people who suffer from epilepsy and Atkins was designed to help reduce weight.

There are so many different diets that are available on the market, some come with food plans while the others allow you to get more creative. However, before you starting a new diet, you should definitely discuss the impact of the diet and if the diet is right for you with your doctor. Depending on your medical conditions, diets can definitely cause shifts in a body, so it is important to consult with your doctor before drastically modifying your eating habits.

Comparison between Keto and Atkins Diet: