Key difference: The Microsoft Surface Pro features a 10.6-inch ClearType HD screen with approximately 208 ppi pixel density. The device runs Microsoft Windows 8, which the same OS that is being run in various laptops and desktops. The device has Full Windows capability. The Asus Padfone Infinity smartphone is a slick 5-inch full HD 1920x1080, Super IPS+ with Capacitive Multi touch panel and provides approximately 441 ppi density. The device is a bar phone, with curved corners giving it a similar look to the ‘iPhone’ and ‘HTC One’. The Asus Padfone Infinity Dock is basically the 10-inch tablet shell that allows users to dock their phone into the tablet by sliding it into a slick slot on the back. 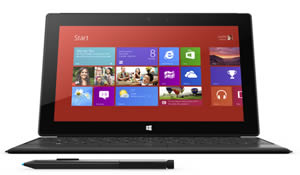 The information for the detailed table about the two devices has been taken from the Microsoft website, the Asus website, GSMArena.com and Wikipedia.