Difference between Monkey and Chimpanzee

Key Difference: Monkeys and chimps, although initially believed to be similar in species resulted to belong to complete differ scientific family. Chimps actually belong to the Ape family, which differs from the monkeys greatly. 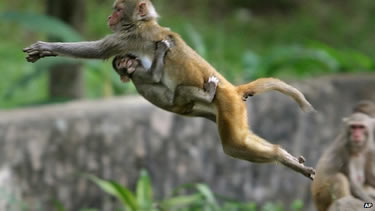 Monkeys and Chimpanzees are often confusing for many people because of their similar looks. To many untrained eyes, monkeys and chimpanzees can seem similar to the point they are even used in literature wrong. The famous Curious George is actually a chimp, and is wrongly referred to as a monkey. While, both monkeys and chimps are primates, they both belong to families.

Chimpanzees or chimps, are actually the closest relatives to the humans, with only a 5% difference in the DNA. Chimpanzees split from the human branch of the family about four to six million years ago.

Monkeys can be divided into two groups: Old World monkeys and New World monkeys, excluding apes and humans. Monkeys are primates that belong to the Haplorhini suborder and Simiiformes infraorder. There are more 260 living species of monkeys, many of which are arboreal.

Monkeys and chimps, although initially believed to be similar in species resulted to belong to complete differ scientific family. Chimps actually belong to the Ape family, which differs from the monkeys greatly.

A simple way to distinguish the monkeys from apes is to check for a tail; monkeys have tails and apes do not, which means that chimps do not have a tail. Monkeys are also often small in size with the smallest being 4.6 inches with a 6.8 inches tail, weighing 100 grams to 3.3 feet weighing 36 kilograms. Monkeys can be arboreal, as well as ground dwellers, which means that they can live in trees or built nests on the ground.

They also communicate via expressions, vocalizations and body movements. They show affection and make peace by grooming each other. Monkeys posses a smaller brain and have a diet of fruits, vegetables and small insects. Monkeys have small arms and long legs and opposable thumbs on both their hands and legs. Monkeys cannot swing from tree to tree as popularly believed, their arm structures do not support this behavior, and rather they run across the branches. They are more prone to running on branches and climbing to the top of the treetops.

Chimpanzees have two different subspecies: the common chimpanzee and Bonobo. Chimpanzees are the only known members of the subtribe Panina. Chimps are often believed to share similarities in DNA with the human and are considered as the closest relatives to human beings.

Chimps are similar in heights to humans, with average male chimp standing up to 1.7 m (5.6 ft) high and weigh as much as 70 kg, while the female is usually smaller and lighter. They have long arms, which are longer than their legs and when extended, span one and a half times the body’s height. The bonobo is slightly shorter and thinner than the common chimpanzee but has longer limbs.

Both the species are known for climbing trees and walking both, on fours as well as twos. Both the common chimpanzee and bonobo can walk upright on two legs when carrying objects with their hands and arms. Chimps have a dark coats and no hair on their face, fingers, palms of the hands, and soles of the feet. They also lack a tail and have testicles that are unusually large for their bodies.

Chimps live in communities of multiple male and female groups with an alpha male. Lower-ranking chimpanzees will show respect by submissively gesturing in body language or reaching out their hands while grunting. Female chimpanzees will show compliance to the alpha male by presenting their hindquarters. Chimps show an increase in tool use, a sign of higher intelligence. They are known to use stones as hammers, sticks to fish out termites, complex nest building, etc. Chimps communicate in a manner similar to human nonverbal communication, using vocalizations, hand gestures, and facial expressions.

Comparison between Monkey and Chimpanzee: