Key Difference: Olive Oil is a retail grade that suggests that the oil is produced as a blend of refined olive oil and virgin olive oil. Extra Virgin Olive Oil (EVOO) is a standard that refers to oil of the highest quality.

Olive oil is sold under different grades including extra-virgin olive oil, virgin olive oil, pure olive oil, olive pomace oil, etc. These are often different from each other in the type of olives that are pressed to the process of pressing the olives. They differ in terms of taste, health benefits and aroma. It is often confusing when a person goes shopping to be hit with so many different words and not be able to understand the difference. Rightly so! Nothing is mentioned on the labels and many times the labels are even wrongly placed to confusing the consumer. It is best to know the difference between these terms as it is best to be knowledgeable about the type of products that a person is buying and consuming. Olive oil and extra virgin olive oil are different from each other. 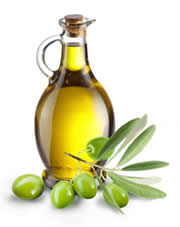 Olive oil is oil that is extracted from olives. The olives are usually hand-picked and then put through the process. Green olives usually produce more bitter oil, while overripe olives can produce oil that is rancid, hence it is important to pick olives when they are properly mature and ripe. The olives that are picked are then put through a grounding machine, where olives are grounded into either small pieces or paste. The less it is grinded the less oxidization resulting in a less acidic taste. The chunks or paste are then added to a pressing machine, where it is layered on small fiber disks and then the machine presses them. The juice/oil that is extracted from then is then separated into water and oil through centrifuge or decantation. Originally, the separation using gravity; however the more advanced technology allows faster separation. Finally, the oil could be filtered to remove extra pieces of olive that could lower the shelf-life of the product.

Extra Virgin Olive Oil (EVOO) is a standard that refers to oil of the highest quality. It is often expensive and is the best grade that is available in olive oils. The process of extracting virgin olive oil remains the same; however it is extracted from the properly ripened olive oil. The virgin refers to the fact that it was only produced by physical means and has received no chemical treatment to alter its taste or flavor. EVOO is said to have an excellent flavor, odor and is said to have less than 0.8% in acidity. It also has a very low smoke point and is best used for topping dishes and salads.

Olive oil and EVOO are often used differently as they have different smoke points and over different health benefits. Since olive oil has a higher smoke point, it can be added to dishes during heating, while EVOO is recommended to be used for topping salads and other dishes. EVOO is also said to have a more excellent taste and flavor, compared to olive oil.  EVOO is also much healthier compared to olive oil due to it being purely oiled from olives without any refining or chemical process. Due to the purity of the oil, EVOO has a much shorter shelf-life and should be consumed within a month of two of being opened.