Difference between Permutation and Combination

Permutations and combinations are both related concepts. As mathematical concepts, they serve as precise terms and language to the situation they are describing. Though they have a similar origin, they have their own significance. In general, both are related to the ‘arrangements of objects’. However, a slight difference makes each constraint applicable in different situations. This article differentiates between the two mathematical terms. 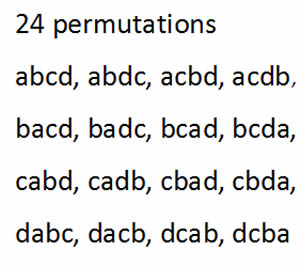 A permutation is an arrangement of objects, without repetition and in which the order of the objects are important. Another definition of permutation is the total number of different arrangements that are possible by using the objects. The mathematical formula is given as:

The expression n!, read “n factorial”, indicates that all the consecutive positive integers from 1 upto and including the ‘n’ object are to be multiplied together, and ‘0!’ is defined to equal 1. For example, using this formula, the number of permutations of five objects taken two at a time is 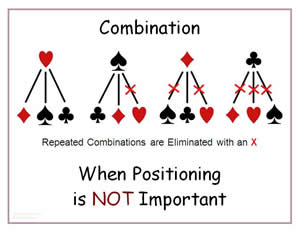 A combination is an arrangement of objects, without repetition, and in which the order of the objects is not important. Another definition of combination is the total possible number of different combinations or arrangements of all the given objects. The mathematical formula is given as:

In the above formula, the number of such subsets is denoted by nCr, read “n choose r.” here, since r objects have r! arrangements, there are r! indistinguishable permutations for each choice of r objects; hence there is dividing of the permutation formula by r! This formula is similar to the binomial theorem. The number of combinations of five objects taken two at a time is taken as,

Comparison between Permutation and Combination: