Difference between SP and LP Recording

Key Difference: SP (Standard Play) and LP (Long Play) define two different recording modes. They primarily differ in context to speeds at which video tapes are run through the recorder. 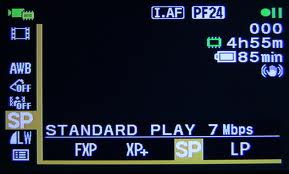 In standard mode, the quality of the recording remains the same as it was intended. There is no type of quality loss. This mode is generally set by default. In VCR, LP is achieved by reducing the speed by which tape would run in the VCR. This  decrease in the tape speed decreases the quality of the recording. One may also find the images as blurred or some type of color issues, which can be easily avoided by choosing SP mode.

The reason behind these discrepancies in two modes is due to the speed by which the tape moves over tape heads. Usually, SP moves the tape at 18.812 mm/sec and LP moves at a 12.56 mm/sec. Generally, recordings by LP are 1.5 times longer than the standard mode.

Comparison between SP and LP Recording: