Difference between Thai and Chinese Food

Key difference: Thai Cuisine is the national cuisine of Thailand. Chinese cuisine represents the different cooking styles originating from the regions of China and its people. 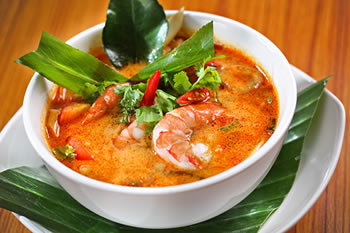 According to Wikipedia, Thai cuisine is the national cuisine of Thailand. Blending elements of several Southeast Asian traditions, Thai cooking places emphasis on lightly prepared dishes with strong aromatic components. The spiciness in Thai dishes is well known. In this cuisine, balance, detail and variety are of great significance to the chefs. Thai food is often considered to be sour, sweet, salty, and bitter, all at the same time. In Thai cuisine, the balance of these tastes in each of the dishes and in the meal as a whole is of utmost importance. Thai food is cooked with fresh ingredients like chili paste, fresh dry chili, basil leaves, onion, lemon grass or mint leaves. It uses less oil in cooking. They are curry based dishes. Fish sauce is a staple ingredient in this cuisine and it imparts a unique character to the food. Fresh fruits, vegetables, herbs, spices, rice and noodles are also core ingredients of this cuisine. Thai food is often served with a variety of condiments or sauces.

A Thai meal typically consists of a single dish if eating alone, or rice with many complementary dishes served alongside and shared by all. In restaurants, it is customary to serve more dishes than there are guests at the table. 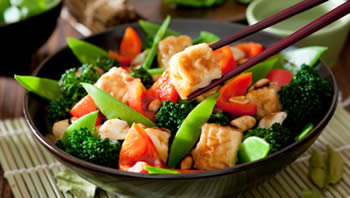 Chinese cuisine reflects the traditional cooking method of its people. Styles and tastes are varied according to class, region, and ethnic background. Chinese food is a little less spicy than Thai food. They cook food in a traditional wok with lots of oil. Chinese people love fried food, which makes it an unhealthy option for food. Lot of preserved ingredients are used in the preparation of the food. Meat is the staple ingredient, along with rice, noodles, vegetables and seasoning. A lot of work is done by the chefs in food presentation for their customers. Food presentation is considered to be a form of art. The dishes are named and considered lucky. Examples are: beef noodle soup, orange chicken and egg flower soup, etc.

Both Thai food and Chinese food are different, because of a difference in regional and cultural styles.

Comparison between Thai and Chinese Food: