Key difference: Water Cycle or Hydrologic Cycle or the H2O cycle describes the continuous movement of water from on, above and below the surface of Earth. It is the journey, which water takes as it circulates from the land to sky and back again. This cycle maintains the water consistency throughout the Earth.

The water cycle is also called as hydrological cycle or the H2O cycle. Almost 70% of the Earth consists of water; it is the natural source which exists in nature. The amount of water remains fairly constant on earth’s surface due to its respective cycles. Water keeps on getting regulated from ground to sky and then back to ground through evaporation, precipitation and cloud formation methods. Also, the distribution of water is not uniform throughout, it keeps on changing, but the water cycles do maintains the uniform amount. Water or Hydrological cycle totally depends on the amount of rainfall fallen on the ground surface.

Water or Hydrological cycle exchanges energy, which leads to change in temperatures. At first the water evaporates by taking the energy from the surroundings, this process cools the environment. So, when it condenses it releases energy and warms the environment. From this heat exchange the climate gets influenced. The evaporative phase of cycle purifies water which then replenishes the land with freshwater. This evaporation phase in the cycle purifies the water which replenishes the land with freshwater. The water further gets accumulated in the clouds and gets condensed in the clouds. When the clouds gets heavy or become full with these accumulations they burst out in the form of rain precipitations on the ground. Hence, this gives rise to the rainy season and fills the ground with water on the ground. 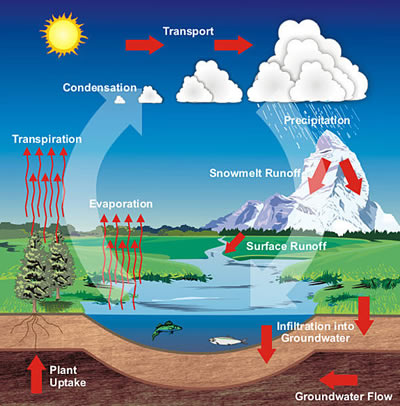 Water therefore comes back on the ground surface. This cycle continues further by following the heat in the hot climate. The main methods which take part in the water cycle are: