Difference between Waxing and Plucking

Key difference: Waxing and plucking are two different methods of removing facial and body hair. Waxing is a form of semi-permanent hair removal that is used to rid unwanted hair and it results in large patches of hair being pulled out of the root. Plucking is a more time consuming process, in which one uses a pair of tweezers to pull hair one by one.

Waxing and plucking are two different methods of removing facial and body hair. They can be done in almost everywhere on the body. Both of these are completely different and also have different results.

Waxing must be done by a professional at least a first few times, before the person learns to do it at home, specially dealing with hot or strip wax. Although waxing is painful, it is considered more beneficial as opposed to other forms of hair removal. When waxed, the hair is pulled from the root, resulting in the weakening of the root; the hair that re-grows is usually thinner and weaker. Waxing can also result in in-growth in certain areas; in-growth is when hair grows under the skin and requires exfoliating to remove from under the skin.

Plucking is a more time consuming process, in which one uses a pair of tweezers to pull hair one by one. As each hair must be pulled out individually, plucking is only reserved for small areas such as eyebrows or upper lip. It may also be used to remove hair that is re-growing after waxing, to remove in-grown hair, and/or to remove single thick strands of hair that may grow in areas such as chin, cheeks, thighs, etc. If not done correctly, it may also lead to in-growth hair.

Each method has its advantages and disadvantages. Plucking may lead to thicker hair, as plucking each hair individually stimulates the dermal papilla more than waxing. As each hair is plucked, the area is stimulated more, leading to an increased blood supply and strengthening of the hair follicles. This is not the case in waxing, as a large patch of hair comes off at once. Also, waxing tends to be quicker for the same reason. 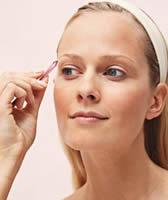 Waxing is also considered to cleaner, as it easily grabs onto all hair, including the thin fine ones. Plucking, on the other hand, depends on the scrutiny on the one who is doing the tweezing, if they do not see the hair and pluck it individually, the hair will be left on. This is especially true of thin fine hairs.

However, waxing is considered to be messier in nature. It also requires more supplies. For waxing, one needs wax, a heater, strips, applicators, powder, and wax remover, whereas for plucking, one only requires a pair of tweezers. Also, the wax is sticky and tends to get everywhere. It may even spread onto the hair that one wants to keep, especially in the case of eyebrows.

Due to this, many women do not stick to just one or the other. Many do both, reserving each for different areas as that which serves it best. Waxing is generally saved for large patches for hair, such as legs, arms and underarms; sometimes, upper lip and bikini area. Whereas, plucking is generally reserved for eyebrows, extra hair on face, and anywhere else as such required.