Key Difference: Drug is any substance which alters the normal functioning of the body. Drugs are mainly classified into three main categories – depressants, stimulants and hallucinogens, based on their effect on the central nervous system.

Drug refers to any substance which affects the brain and nervous system. The intake of drug alters the physical or psychological conditions of the person. They can be in any form – solid, liquid or gas. Drugs are mainly classified according to the effect caused by them. However, they can also be classified based on the legal or illegal usage. Drugs are mainly divided into three broad categories – depressants, stimulants and hallucinogens. 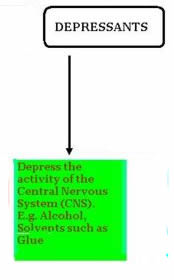 Depressants – The main effect of a depressant drug is slowing down the activity of the brain and nervous system. Many of these drugs are used medically for relaxation of muscles, calming the nerves, dealing with sleeping disorders like insomnia, etc. They generally do not cause any harm to the body when taken in small quantities. However, when taken in large quantity they can cause serious ill effects like vomiting, unconsciousness and even death.

Some of the well-known depressants are –

Alcohol – It is a type of seductive drug which alters the way a person feels. Pure form is colorless and odorless. It does not provide any nutrients to the body.

Cannabis – It is derived from the Cannabinaceae family of plants. It is also known by the names like Ganja, Marijuana, Pot, Weed, etc. The main ingredient present in this plant is THC or delta-9 tetrahydro-cannabinol. It is generally smoked in hand rolled cigarettes.

This group of depressants also includes drugs like benzodiazepines, sleeping pills, GHB, barbiturates and some solvents and inhalants too.

Stimulants – Stimulants refer to those drugs which primarily increase the activity of the brain. These drugs are generally associated with feelings of extreme well-being.  They are further divided into mild and strong stimulants. These drugs increase the temperature of the body as well as the blood pressure. An increased heart rate is also resulted after the consumption of these drugs. If taken in large quantity they can create anxiety, panic, headaches, paranoia, etc.

Some of the well-known mild stimulants are –

Caffeine –It is made of bitter tasting crystals in its purest form. It can be commonly found in coffee, tea, cocoa, chocolate, etc. It is derived from the stimulants known as methylxanthine or xanthine, which occur naturally in some plants.

Nicotine – It is an alkaloid which is made by several types of plants like tobacco plant. It is also produced synthetically. It is very addictive and a person may feel craving, or a sense of emptiness on stopping the intake suddenly after its regular usage.

Some of the stronger stimulants are -

Cocaine – It is derived from the leaves of the plant known as coca bush. It is a very strong stimulant and is known for providing an intense but short lived high.  If taken in large quantity it can cause stroke, seizure, heart attack, vomiting, chest pain, twitching, feeling of anger, etc.

Ecstasy – It is a synthetic drug which is chemically same as the stimulant methamphetamine and the hallucinogen mescaline. It is also known by street names like Essence, Hug Drug, Love Drug, etc. 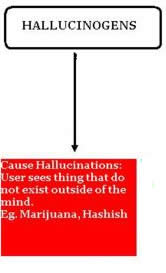 Hallucinogens – These drugs tend to change the person’s perception towards the real world or reality.  Its users usually see images or hear sounds which they think are real but in reality do not exist. Some of them also cause intense mood swings.

Some of the well-known hallucinogens are –

LSD – It is a substance which is synthesized from lysergic acid, a compound taken from rye fungus. Firstly, it is produced in in the form of crystals, and later it is crushed for power form.  It produces physiological effects like increased blood pressure and heart rate, sweating, numbness, tremors, dizziness, etc.

PMA or Peramethoxyamphetamine – it is a synthetic drug which produces similar effects like ecstasy. It is generally taken in the form of pill or capsule. It usually provides an energy boost to people who make them feel more alert and alive. It is more dangerous than ecstasy as it can kill even if taken in lower doses.