Key difference: Software testing assesses the quality of the product. Basically, it is carried out to detect the difference between given input and expected output. There are various testing techniques distributed among the main types. These types are not concerned with the process of program execution or application, but intend to find out the bugs (error or other related defects). List of such types are explained below. 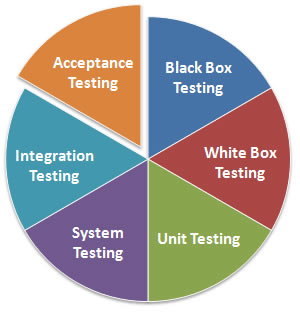 Software testing is a method of validating or verifying a computer program/application/product. Software testing is an investigation carried out to provide the product or service information and their quality to the stakeholders under a test. Actually, testing can never identify all the defects or errors within software; it only furnishes and compares the state and behavior of the product. Following are the characteristics which it obtains: 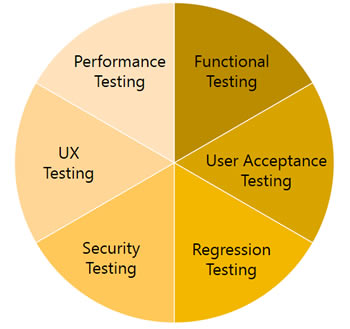 Primarily, testing aims to detect the software failures, so that defects related to any program or application can be discovered and corrected. Testing cannot establish that a product functions properly under all conditions but can only establish that it does not function properly under specific conditions. The scope of software testing often includes examination of code and their execution in various environments and conditions, accordingly there are various testing types which are carried out today in several IT and development sectors. The main testing types and their explanation are included below:

Main Processes of software testing are:

Verification: this process checks whether the product satisfies the expected need or not.

Validation: this process checks whether the product is built as per the customer’s requirements or not. It is carried out at the end of the development phase.

Blackbox Testing: it is testing technique which ignores the internal mechanism of any system and focuses on the output generated against the input and execution of the system. This is also called as functional testing.

Whitebox Testing: it is testing technique which considers and accounts the internal mechanisms of a system. Often, it is called as structural testing or glass box testing.

Comparison between different types of Testing:

This technique is carried out in a group of related units. Its one of the Whitebox Testing types. Programmers use this type in order to check whether the unit produced by them gives the expected output or not.

The testing technique is carried out among the group of components, which are combined to produce the output. The testing also tests the interaction of hardware and software integrations. This technique may therefore be considered under both, white box testing and black box testing.

As per its name suggests, this testing is carried out to ensure the specific functionality as per the system requirement working. This testing is categorized under the black box testing.

This testing checks software’s behavior in unfavorable environment. This is carried out beyond the limits of specification. It is one among the black box testing types.

This testing is carried to assess the speed and effectiveness of the system, it checks whether the system generates any relevant results within a specific time slot according to the performance requirements. It comes under the black box testing types.

This testing is carried out in perspective to the client. It resolves over the questions like: How the GUI is user-friendly? How easily can the client learn? After learning how to use, how proficiently can the client perform? How pleasing is it to use its design? This falls under the class of black box testing.

This testing is often carried out by the customer, in order to ensure that the delivered product meets the necessity and works according to the customer’s expectations. It comes under the class of black box testing.

This testing is done after the modification of any system, component or group of related units in order to confirm the changes so done are working correctly or not, or the changes are not damaging or imposing on any other modules to form any other unexpected results. It comes under black box testing types.

This testing is carried out by the end-users, a team outside the development team or publicly releasing full pre-version of the product which is known as beta version. The testing basically aims to expose the unexpected errors. It comes under the black box testing class.

There are other different types of Testing too, which are conducted as per the need and requirements.