Difference between a Positive Ion and a Negative Ion

In chemistry, atom is considered to be the smallest particle of a matter. And, matter is what the entire universe made off. So, all matter, living or non-living organisms are made up of atoms. An atom consists of a small nucleus, which is made up of protons, neutrons and electrons. Only, the protons and the neutrons are present inside the atom, whereas the electrons revolve around the nucleus in a dedicated circular path. 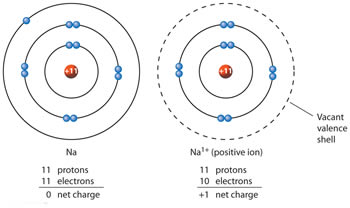 In ionization, the ion with a net positive charge on it is termed as ‘positive ion’ or ‘cation’. Cation is an ion which has a greater number of protons than electrons. It is formed when the neutral ion loses its one electron from the valance shell, and the number of protons in the nuclei becomes higher than the number of electrons in the outer-shell. And, because of the less number of electrons, a positive charge is attained by the ion.

Both, anions and cations can be further divided depending upon the multiple charges. And, all the above terms are used for single charges. The positive ions and negative ions are differentiated in the table below.

Comparison between a Positive Ion and a Negative Ion:

I am Ayesha Mohammed from the UAE in grade 7. I actually liked this website alot, it is so useful and has plenty of information, especially for my age! I thank whoever work so hard for it's sake, and I think that this website must be known more than other scientific websites.

I am pretty sure that positive ions are the ones that have more protons than electrons and are called cations...

Yes,you are right. The table is reversed. The info on positive ions and negative ions is exchanged.