Difference between Beer and Cider

Key Difference: Most types of beer are actually created from barley, though other malted grains such as wheat, hops, etc. can be used. Cider, on the other hand, is primarily created from either apple pulp or apple juice, but apple nonetheless. 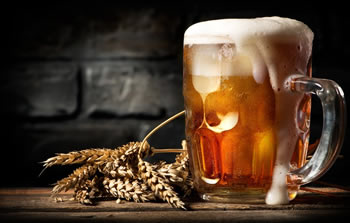 Beer and Cider are two different types of alcoholic beverages. However, it can be quite confusing to tell them apart, as they are very similar, which is why many people mistakenly think that they are either the same thing, or just variations of the same thing. In actuality, the two are completely different beverages that are made from different ingredients and via different processes.

Beer is considered to be one of the oldest alcoholic beverages still being drunk today. After water and tea, it is also the third most commonly drunk beverage. Still, many people don’t realize that cider dates back almost to the same age as beer. In fact, cider was more popular with early North American settlers as the ingredients for cider were more easily available than the ingredients for beer.

These ingredients are actually the primary difference between beer and cider. Most types of beer are actually created from barley, though other malted grains such as wheat, hops, etc. can be used. Cider, on the other hand, is primarily created from either apple pulp or apple juice, but apple nonetheless. While ciders can be made from other fruits, they will not be labeled as ciders, even though the process might be the same or similar. For example: a beverage made from fermented pear juice, via a similar fermented process is labeled and sold as Perry. Only apple fermented drinks can be called ciders.

Some beers can include fruits such as apple in their ingredients, however, ciders almost never include

In the UK and other European Nations, cider is nearly always alcoholic, whereas in the United States, both alcoholic and non-alcoholic variations are available. Non-alcoholic cider is labeled as cider, whereas alcoholic versions of cider are labeled and sold as Hard Cider, which tend to have the same alcoholic content as beer. Most beers are have an alcoholic content of 4% to 6% alcohol by volume (abv), though some can vary between 0.5% and 20%, with some breweries creating examples of 40% abv and above. Alternately, alcohol content in cider varies from 1.2% ABV to 8.5% or more in traditional English ciders, and 3.5% to 12% in continental ciders. 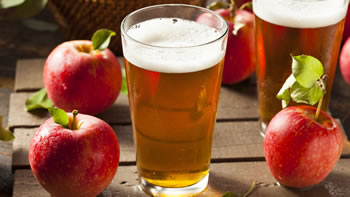 Another difference between Beer and Cider is the manner of their fermentation. The manner in which cider is fermented is similar to wine, rather than beer. As both wine and cider are fermented fruit juices, it is only understandable that the fermentation process would be similar to each other. During the fermentation process the yeast eats at the sugars present in the liquids and converts it to carbon dioxide and alcohol. However, the sugar content in fruit juices, such as apple juice is much higher than in barley water. Hence, the fermentation process for cider tends to take longer and ends up having higher alcohol content than most beers. Of course, the recipe can be modified to change this and create both beers and ciders with higher and lower alcohol contents.

Nowadays, a number of breweries are creating hybrids, beverages that blend tendencies of both beer and cider. These can be a beverage that is created from a blend of apple and barley, or alternately it can be mixed drink which is created by mixing beer and cider. There drinks have been increasing in popularity.

Comparison between Beer and Cider: