Difference between Bipolar I and Bipolar II

Bipolar I and Bipolar II are two forms of Bipolar disorder. People often hear about the bipolar disorder, but not many people are aware that there are two major forms of this disorder. They are often confused as the same thing because of the many overlapping symptoms that make them seem similar in nature. However, they are not the same and have distinct differences. Many experts even suggest that Bipolar II is a less sever condition of Bipolar I. 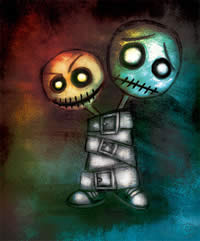 Bipolar I is a mood disorder that is characterized by at least one manic episode or a mixed episode. According to the American Psychiatric Association's diagnostic manual a manic episode is a period of seven or more days where a patient exhibits open elated or irritable mood, which is not caused by any medications or drugs. The person may also suffer from psychosis and may suffer from hallucinations and delusions. For a person to be diagnosed with a manic episode, three of the following must be present: grand or extravagant style, or expanded self-esteem; pressured speech; reduced need of sleep (e.g. three hours may be sufficient); talks more often and feels the urge to talk longer; ideas flit through the mind in quick succession, or thoughts race and preoccupy the person; over indulgence in enjoyable behaviors with high risk of a negative outcome.

The patient can also swing between two different moods such as extreme happiness and extreme sadness. The person suffering from a mixed period is diagnosed with bipolar I. Mixed episodes are somewhere between manic and major depressive. It is associated with grandiose feelings with racing thoughts. The person may be irritable, moody, pleased and feeling bad at the same time. Bipolar I is also characterized by extreme states, such as manic as well as depression is in its extreme state and the person may require medication and to be hospitalized or detained during these stages.

Bipolar II is a mood disorder that is characterized by at least one hypomanic episode and one major depressive episode. In this disorder, depressive episodes are more frequent and intense than hypomanic. People diagnosed with bipolar II have never experienced a full manic episode but they can experience periods of high energy and impulsiveness. Hypomania is a state of mood that is associated with persistent irritable or elevated mood. Many people that are suffering from hypomania are not extreme, though they may show behavior such as excessive energy, lack of sleep, confidence, talkative, assertive, hypersexuality and creativeness. Unlike manic episodes, people suffering hypomania are fully-functioning.

Bipolar II is commonly under-diagnosed as the patient is fully functioning during an episode. Bipolar II patients also suffer from major depression, which can also affect their functioning. This often causes them to be diagnosed as depression. During depressive episode, the person may show symptoms such as low energy levels, lack of interest in usual activities, unrealistic pessimism, overgeneralization, isolation from people and thoughts of suicide. Bipolar II patients are at the highest risk of suicide compared to Bipolar I patients.

Treatment for both Bipolar I and Bipolar II is very similar and includes various different kinds of therapy and medications such as antidepressants.