Difference between Block and Bulk Deals 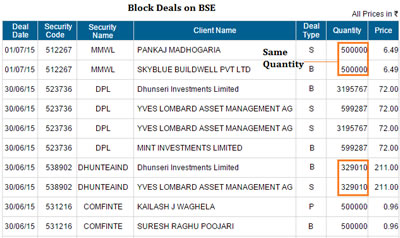 A block deal is a type of deal in which a minimum quantity of 5 lakh shares or shares with a minimum value of Rs. 5 crore are sold in a single trade. The stock exchange allows for only a 35 minutes period in the beginning of the trading hours in which block deals can be traded, and they must be traded in a separate "Block Deal window" so as to not disrupt the market.

Additionally, they can only be traded between two parties who have predefined and negotiated the price, as one the block deal is listed it must be completed within 90 seconds, otherwise the deal is null and void. Also, the price of the deal cannot be more than +1% or less than -1% of the last traded price or the previous day’s closing price.

Also, in case a block deal does take place, the deal needs to be reported to the stock exchange, after which they are disclosed on the exchange’s website for all to see. This is to ensure that there is no backhand dealings in the trades, and that relevant persons know of the deal.

A bulk deal, on the other hand, is somewhat similar to a block deal in the sense that it also allows for buying or selling of larger number of stocks, however they work on slightly different premises. A bulk deal is a type of deal in which more than 0.5% of the number of equity shares of a company are bought or sold in the market in the same day. The deal need not be done in one single large deal but can be conducted in smaller pieces. However, if the total number of shares that are bought or sold exceed 0.5% of the security’s total, then it is considered as a bulk deal.

However, unlike a block deal, the price of a bulk deal need not be predetermined. Instead, it is market driven, i.e. a person can sell at any price they deem fit. They also occur in the regular window rather than in any special window. A bulk deal also needs to be notified to the exchange immediately upon the execution of the order. Alternately, if it occurs through multiple trades, it should be notified to the exchange within one hour from the closure of the trading.

Both Block and Bulk Deals may have an impact on the market, especially on the prices of the shares that are bought and sold. However, most of the time there are no significant impacts, as they are mostly auto dealing. Still, if these deals take place regularly for a particular stock, it may indicate that the prices may rise.

Comparison between Block and Bulk Deals: