Difference between CDMA and GSM

Key Difference: CDMA allows multiple users on the same channel using unique codes. GSM divides users into time slots or on different frequencies, where only one user is allowed to use one channel slot at one time.

When purchasing a mobile phone, a normal person usually does not care much about the type of channel it uses, the frequency rate, the way data is transferred, or if it is GSM or CDMA; he only cares about the company he prefers (T-Mobile, Reliance, Vodafone, etc), the type of phone wants (iPhone, Samsung, etc) and the cost and the type of bill payment (pre-paid or postpaid). This is usually what goes through a consumer’s mind when purchasing the bill and in many cases they don’t even know if they are purchasing a CDMA network or a GSM network specially in countries such as the United States. CDMA and GSM are two different types of standards that are available for transmitting data and mobile voice services on a cell phone or mobile phone. 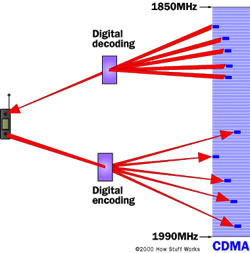 CDMA is shorthand for Code Division Multiple Access, which is one of the major radio systems that are used in cell phones. In tech lingo, CDMA is actually known as Interim Standard 95 (IS-95) and it is the first digital cellular standard by Qualcomm. IS-95 is a 2G mobile communications standard that uses CDMA to send voice, data and signaling data between cell phones and towers. CDMA is a multiple access scheme for digital radio. CDMA standards allow various radios to share the same frequency, which enables all radios to be active at the same time. Since one frequency can host a number of radios, a small number of cell-towers are required allowing it to have a significant economic advantage over other standards. This type of standard is dominantly used in the United States, where the significant number of carriers offer only CDMA services.

CDMA runs on a code system, where every call data is assigned with a unique code so that when all the voice data is transmitted it once it the receivers have a unique key to divide the code into individual cells. This allows all the calls to run on the same frequency without having to interact with each other. CDMA is considered as having more advanced technology due to being able to offer faster and clearer voice and data transfer rate, it also provides more security due to the encryption of each phone call. However, it also has a few limitations such as it is not widely available which results in it being only used in selective areas such as the United States. It is also carrier dependent, in terms that if a user wishes to change the phone, he would require another mobile that is only provided by the carrier or is CDMA compatible and cannot willing switch between carriers.

Let’s use an example to help understand how the data is transferred in CDMA network. Let’s imagine a group of people that are placed in a single room and divided into couples. All off the two people groups would be talking to each other; however each group of two would be talking in a different language so that they do interfere with the other couples.

The GSM, shorthand for Global System for Mobile Communication, is a standard that was developed by the European Telecommunications Standards Institute (ETSI) to describe the 2G network for cell phones. This was created in 1991 as a replacement for the first generation (1G) analog cellular networks. The way that the GSM standard transmits data only allows a few people to connect to one frequency at one time, resulting in requirement of many cell towers. This sometime causes frequencies to mix, resulting in wrong calls or accidently being connected to another call. GSM is has a larger market share of 76% and is popular in many countries including Europe and Asia. The GSM standard uses two different technologies for transferring voice and data from the cell phone to the network tower: Time-division multiple access (TDMA) and Frequency-division multiple access (FDMA). The TDMA technology allows multi-user technology that divides the channel into sequential time slices and allows each user to take turns transmitting and receiving signals on that particular channel. In actuality, only one person uses the channel at one time. The FDMA actually works a bit better where it divides the call according to frequencies. This technology provides multi-user access to one channel by placing them of different frequencies, while then using TDMA to separate users within different cells.

CDMA and GSM have been in constant competition trying to capture the market and both have strong points as well as weak points. As stated previously, in terms of technology CDMA won the upper hand and GSM in had to shift to CDMA for its 3G technology. However, it still made it incompatible by deploying WCDMA (Wideband CDMA) or UMTS (Universal Mobile Telecommunications Service). While, CDMA depends on the EV-DO and SV-DO for its 3G technology. CDMA EV-DO technology is also flawed in the sense that it cannot transmit voice and data at the same time, while GSM can transmit both. GSM has the upper hand in the market share due to its leniency with allowing the users to change their phones to any unlocked GSM-compatible phone by just placing their SIM card into the new phone. However, in terms of data transfer rate in 2G as well as clarity of calls, CDMA is unbeatable. Only recently as GSM been able to surpass CDMA’s transfer rate using its 3G technology. For the 4G standards, it is estimated that both the companies would have to resort to 4G LTE ( Long Term Evolution) standards.