Difference Between Cite and Quote

Key difference: A Quote is repetition or recreation of something someone has said or written. To cite is to refer to a particular subject, words or thoughts of a person or publication. 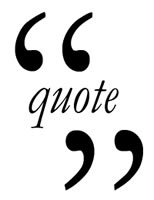 There is a subtle difference between ‘quote’ and ‘cite’. A Quote is a repetition or recreation of something someone has said or written in the past. To cite is to refer to a particular subject, words or thoughts of a person or publication. This is done to prove a point or support one’s theory.

According to Merriam-Webster, the definition of a ‘quote’ is:

Merriam-Webster states the definition of ‘cite’ as:

A quote is basically to repeat someone’s words or something that was printed. It is an exact repetition of the words. The words are not changed or manipulated, and are often from a book, speech, essay, research paper, etc. The words are written is quotation marks. For example, above, the definition of quote is in quotation marks, because those are the exact words from the Merriam-Webster’s webpage.

A quote also has another meaning in commerce. When someone gives or states a price for a job to be done. For example: The contractor quoted $400 for fixing the roof.

When one quotes something or someone, they usually have to cite the source, i.e. where did they get the quote from. For example, the definition of ‘cite’ is from Merriam-Webster. To cite refers to using something someone has said or written. This is done in order to be used as proof to support one’s theory.

Citing is not reproducing the same words like a quote. One will not use the exact language from the original source. Or, on the other hand, one might use the exact same language, a quote, and then cite the source of the quote. Citing is used to represent the idea, principal or theory behind the quote. It is done to bolster one’s own theory. One can cite a book, a research paper, or any work which has been done by an expert.

Citing also has another meaning. A person can be cited for a behavior, good or bad.

Examples of a ‘quote’: