Difference between Convex and Concave Lens 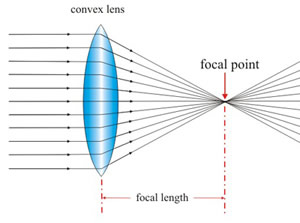 A lens can be defined as a transparent material (like a glass) that has either an open curved surface or one flat surface or two curved surfaces. They work on the principles of refraction, as they change the direction of light waves by refraction. A convex lens focuses light rays, and therefore is also known as a converging lens. The focal point is the point where the light rays meet.

These types of lenses are thicker in the middle than in comparison to their edges. Due to this structure, it is able to converge the light rays. They produce real images, and therefore are mainly used in various optical instruments. A convex lens enables a thing to look bigger than its actual size. It happens due the fact that rays focus on the object and the object looks bigger than its actual size. Light that passes through a convex lens can be focused on a surface like a screen. 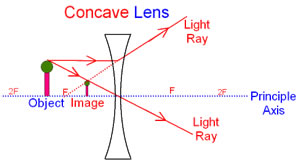 A concave lens is just the opposite of a convex lens. It is thinner in the middle and thicker at the edges. Therefore, it diverges the light rays. The emerging rays do not actually intersect. However, they seem to intersect on the incidence side by tracing the emerging rays backward.

This phenomenon is responsible for the creation of virtual images. Therefore, the image created by a concave lens is always a virtual image rather than a real image. They are unable to form an image on a screen. However, they are widely used together with convex lens in order to provide sharp images to the convex lens.

Comparison between Convex and Concave Lenses:

It's really good. It helps a lot.

thanx for doing my holiday homework

thank u for giving this information it is used for understanding the chapter.now i can answer for any question

Yes. U can ask

why are you cheating :)

I don't get it that concave mirrors form real image while concave lenses form virtual ,is it true I don't get it?can somebody help me

Yes its right but in a case concave mirror also form virtual and errect image. When object place btwn Pole and Focus..