Difference between Curling and Field Hockey

Key difference: Curling is a winter sport contested between two teams, where the objective is to earn the most points, by sliding stones along an ice sheet into a marked target at its end. Field hockey is a game where two teams fight for the possession of a ball by using sticks, to score the maximum number of goals in order to win the game. 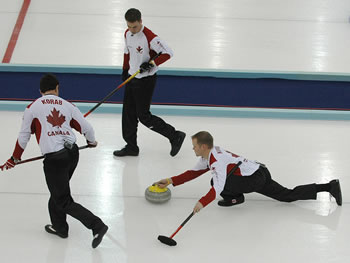 The inception of curling dates back to 16th century Scotland. Curling is a game that’s played between two teams, consisting of four players each. These four players are assigned the duties of a stone slider, the curler, and the sweepers. The instruments used in this game are stones and mini-broomsticks. The stones, or rocks as they’re called, are not actually the ones that are observed in nature. These are especially composed granite stones that facilitate sliding in the game of curling. Curling is played on a sheet of ice, measuring 44.5 meters in length.

The aim of curling is to earn the greatest number of points, which is possible only if the stones hit their targets. For this purpose, the curler is allotted the duties of inducing twists and turns in the path of the stone. Doing this can alter the speed of the stone, and get it as close as possible, to the target. Besides, the sweepers perform the duty of altering the state of ice in the path that the stone is yet to travel. The four players from both the teams keep alternating between these designations, and repeat the process till they exhaust their allocated eight stones. This stage of exhaustion is called an end. A curling game usually contains eight to ten ends, after which, the points scored by both teams are tallied, and a winner is elected. 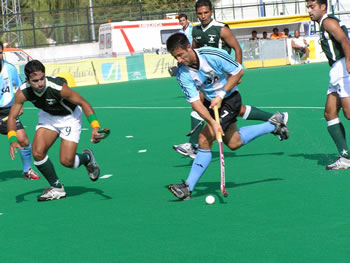 Field hockey, or hockey, is a widely followed sport throughout the world. The game is contested between two teams, comprising eleven players a side. The game is played on a grass field, or an artificial turf of clay, or any other congenial surface. Lasting for seventy minutes, a game of hockey is divided into two halves of thirty five minutes each. Hockey is played using a hockey ball and hockey sticks. The objective of this sport is to score the most number of goals, which would help a team win the game. The game is officiated by two on-field referees, along with a time keeper and a record keeper as well.

The essence of this game is to attack the opposition’s net, to try and breach it as many times as possible, along with protecting one’s own net fiercely, as though a fortress. For this sake, each net at both ends of the field is guarded by the goalkeepers. The goalkeepers carry the onus of keeping the opponents from breaching their net, by securing it and protecting it at all times. The eleven players in a side line up in strategic formations, so as to help the team execute their plans in the best possible manner. In a formation, ten players assume the roles of defenders, mid-fielders, and attackers/forwards. The defenders’ job is to defend the goalie and the goal, while the mid-fielders’ is to act as a link between the defenders and the attackers. The forwards are responsible for attacking the opposing net and scoring goals at the opportune moment. Hockey is one of the most exciting games ever to be played, and brings forth a bevy of emotions from the players, as well as their supporters.

Comparison between Curling and Field Hockey: