Difference between Diabetes Type 1 and Type 2

Diabetes is a metabolism disorder that occurs due to improper usage of glucose in the body. The body utilizes glucose with help of insulin which is secreted by the beta cells of the glandular organ Pancreas. Diabetes is caused under two conditions, insulin deficiency (diabetes 1) and insulin resistance (diabetes 2). 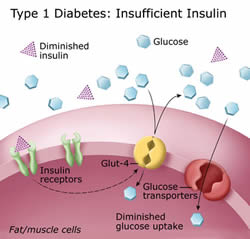 Diabetes 1 is recorded among 5-10% of diabetes patient worldwide while Diabetes 2 is the more common type recorded as 90 -95% the total cases of diabetes.

Diabetes 1 or Diabetes Mellitus Type 1 is primarily featured by autoimmune basis when the immune system of the body malfunctions and damages the pancreatic beta cells of the islets of Langerhans, diminishing the production of insulin. Insulin controls the glucose usage in the body. The sequential inadequacy of insulin leads to increased level of glucose in blood and urine. Diabetes 1 is commonly found among the adolescence and teen group.

Diabetes 1 is generally categorized under two sub categories, type 1a which is Latent Autoimmune Diabetes of Adults (LADA) and type 1b. In Type 1a the immune system of the body becomes hyperactive and misidentifies the beta cells as non-self or foreign cells. The controlling T-cells, particularly CD4 and CD8 T cells of the immune system take on an antipathetic role and lead to a pathogenic reflex by intruding the pancreatic islets and destroy the beta cells. Prolonged destruction of the endogenous insulin producing cells leads to a deficiency of insulin in the body. In this type the diabetes can be detected through a laboratory test. If the blood is detected to have markers like islet cell antibodies (ICA), glutamic acid decarboxylase (GAD), antibodies targeting on membranous tyrosine phosphatase. Type 1a is treated with medication; however sometimes require insulin replacement therapy too. Type 1b is recognized when the body cycle requirement for insulin changes.

Diabetes 1 is treated with regular medical management and monitoring of blood sugar and ketone in the blood stream along with a properly monitored diet. The most common and followed treatment is insulin injection or usage of insulin pump to introduce insulin in the body artificially, since insulin is an essential element to maintain a balance of metabolism. 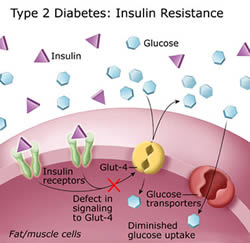 Diabetes 2 is the more common form of diabetes that has been recorded among diabetes patients. Diabetes 1 is a metabolic disorder mediated due to corresponding insulin deficit and insulin resistance disposition. The body undergoes a dearth of required insulin count to overcome the resistance.

The relative symptoms indication Diabetes 2 includes obesity in most cases effectively for those patients affected by genetic disposition. The other prototypal symptoms include frequent urination, increased thirst and excessive hunger. Fatigue, blurred vision, peripheral nervous system disorders are other symptoms recorded often. Certain medications can also predispose to diabetes 2. Apart from genetic factors which records to 80-90% patients having a family member predisposed to diabetes, Diabetes 2 can be attributed to inadequate physical exercise/activity, insufficient diet, mental strain and other lifestyle factors.

Treatment of Diabetes 2 includes regular monitoring of blood sugar and ketone level. The common medical attention for Diabetes 2 includes oral pills, metformin or insulin, dietary control and non-insulin treatments. Controlled diet, minimized intake of sugary drinks and higher dietary involvement of vegetables in diet can be one of the essential prevention measures. However, regular exercise and monitored weight loss or gain can contribute greatly to prevent diabetes risks.

A detailed comparison of basic factors between Diabetes 1 and Diabetes 2: