Difference between Fascism and Imperialism

Key difference: Fascism is a form of radical authoritarian nationalism. It is a movement based on rejection of social theories. Fascists sought to unite their nation into a totalitarian state based on ancestry and culture. Imperialism, on the other hand, is not entirely as radical or authoritarian as fascism, it is the policy of acquiring new lands and territories to enhance or increase one’s influential power. 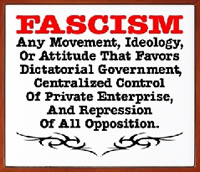 Fascism and imperialism are two different political ideologies. Due to history’s dynamic current, the definitions of fascism and imperialism have altered over the years. While, imperialism has been a part of history, fascism is a fairly new concept. It was founded by Italian national syndicalists during World War I. Fascism secured its name in history as the authoritarian, nationalist rule under Prime Minister Benito Mussolini during World War II.

Dictionary.com defines fascism as “a governmental system led by a dictator having complete power, forcibly suppressing opposition and criticism, regimenting all industry, commerce, etc., and emphasizing an aggressive nationalism and often racism.”

Fascism is a form of radical authoritarian nationalism. It is a movement based on rejection of social theories. Fascists sought to unite their nation into a totalitarian state based on ancestry and culture. The totalitarian state would then seek the mass mobilization of the national community through discipline, indoctrination, and physical training. Fascism champions the myth of the rebirth of a nation after a period of destruction. Fascism also promoted superiority on the basis of races, expansion of imperialists, and ethnic persecution. They declare that peace is weakness, while aggression is strength. A fascist party and state is usually led by a supreme leader who has dictatorship over the party, the government and the nation.

Imperialism, on the other hand, is not entirely as radical or authoritarian as fascism, though it has had its times. Imperialism, mainly due to its longer history, has been more versatile. It has ranged from oppression to peaceful settlement. Still, many consider it to be an exploitation of native people. According to “The Dictionary of Human Geography”, imperialism is “the creation and/or maintenance of an unequal economic, cultural, and territorial relationship, usually between states and often in the form of an empire, based on domination and subordination.”

Merriam-Webster, defines imperialism, as “the policy, practice, or advocacy of extending the power and dominion of a nation especially by direct territorial acquisitions or by gaining indirect control over the political or economic life of other areas.” Essentially, it is the policy of acquiring new lands and territories to enhance or increase one’s influential power. Not only does acquiring territories increase one’s power, it also increases their economic and military dominance and influence.

According to Walter Rodney, a Marxist historian, imperialism meant capitalist expansion. He claimed that by internal logic of their competitive system, capitalists were forced to seek opportunities in less developed countries in an attempt to control raw material, to find markets, and to find profitable fields of investment. This theory can be claimed to incorporate modern capitalist ventures and their methods of outsourcing. 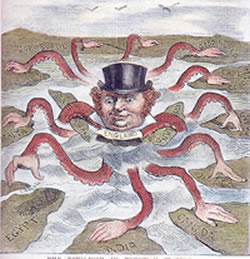 Another form of imperialism, one with a much more modern relevance, is considered to be cultural imperialism. Cultural imperialism is the practice of promoting and artificially injecting one nation’s culture or language into another. Usually, the culture and language of an economically or militarily powerful nation is injected into a smaller, less affluent nation. Cultural imperialism can be a form of an active, formal policy or a general attitude. It does not require military or economic force, as cultural influence is a process that goes on at all times between all cultures through general contact. Cultural imperialism just builds up on it. A modern example of this is “Americanism,” where the culture of the United States of America has influenced and has been incorporated into cultures of nations around the world.

Imperial power tends to last much longer than fascist power, as it tends to have much less resistance. This is mainly due to the fact that imperialism is not as brutal and tyrannical as fascism. Fascist regimes are more usually than not totalitarian and oppressive in nature, and they often tend to last only as long as the dictator who enforces it does.

Fascism is often looked down on. It is nearly always referred to in a negative context, as it is often linked with Nazi Germany, Fascist Italy or Stalin Russia; grim reminders of human history. Stalin, Hitler and Mussolini ordered horrendous tragedies, such as prosecution and mass murder of millions: of Jews in Germany and Russians in the infamous Stalinistic purges. Fascist dictators have been known for oppressing large sections of people, and for violation of human rights, such as freedom of speech and expression.

Imperial empires, on the other hand, are viewed with much more leniency. They did have their share of brutality, such as colonization and destruction of native ways of life, as imperial empires often viewed their colonized subjects as inferior to them. However, these empires are also known to have introduced technology, medical advances and industrialization to their colonies. They also often united different factions of the region under one nation. For example, while the British did suppress the Indians and their aspirations of freedom, they also united all of them under one nation, i.e. India and gave them a sense of nationhood. They also introduced railways and telegraph, built roads and bridges across country, provided them with a professionally trained armed force and introduced the Indian penal code.

Imperialism played a major part in industrialization of the modern world and is hence looked upon with nostalgia, often by both the imperialists and their former colonies. They often just shake their heads in remorse on the oppression of the colonies and the violence on the natives. However, the oppression of citizens and the violence ensued by the fascist leaders rile people up with disgust and contempt. Fascism is an ideology has been forever more linked with bloodshed. Even now, Germans, Italians and Russians seek to distance themselves from their horrid legacies.