Difference between Flying Ants and Termites

Key Difference: Flying ants or winged ants is a stage in the lifecycle of ants, where a few ants grow wings. Not all ants grow wings. Termites are eusocial insects and are popularly known as ‘white ants’ though they differ from ants in various ways.

Flying ants and termites are two different insects. Though termites are referred to as ‘white ants’, this is not true and they are completely different from ants in many areas, including body, shape, reproductive cycles, and wings. 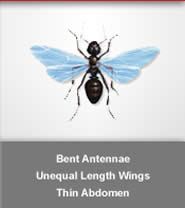 Flying ants or winged ants is a stage in the lifecycle of ants, where a few ants grow wings. Not all ants grow wings. Ants in general belong to the Formicidae family and the Hymenoptera order. Ants are found in various different sizes and a total of 22,000 different species are estimated to exist. Ants usually reside in colonies, where a majority of the ants are foragers and workers. The winged ants are usually male and female ants that are responsible for reproduction. The mature ant colony usually produces one or two winged virgin queens and a few males. The unfertilized eggs develop into males, while the fertilized eggs produce females. The majority of the eggs will result in wingless working ants, while a few eggs that receive special attention become winged queens.

The winged males and females wait for the proper conditions for the nuptial flight, the night were they mate in order to produce more eggs. During the flight, the females and the males scatter, with the queen then releasing pheromones to attract males; however running away from the males in order to get the fastest and the fittest male to mate with her. The queen mates with multiple males during the flight. The sperm from the males are stored in a special organ, known as spermatheca, which is located in the queen’s abdomen and can last the queen’s lifetime. The males inject their internal genitalia into the genital chamber of the queen and then die. After the flight, the young queens shed their wings and attempt to find a new place to establish a colony.

The ants are made up three main parts: the head, the thorax and the abdomen. The head houses various organs such as eyes (compound eyes along with three small ocelli eyes), the antenna which are bent in an elbow shape, mandibles and in some species a small pouch inside the mouth to store food. The thorax which supports the wings during the winged stage; the wings are unequal in shape, with the forewings being bigger than the back wings. Lastly the pointed abdomen, which is used to store food as well as reproductive organ; in some species the abdomen, has small hairs. Many ants are omnivores and they thrive in almost all ecosystems due to their ability to easily adapt and modify resources.

Termites initially belonged to the Isoptera order but are now classified under the Blattodea order and Termitoidae epifamily. Termites are eusocial insects and are popularly known as ‘white ants’ though they differ from ants in various ways. They are famous for destroying wood and similar objects are considered as a pest in many countries. Unlike many ants, termites divide labor among castes, produce overlapping generations and take care of young collectively. It is estimated that there are approximately 4,000 different species of termites that exist. The winged termites, also known as ‘alate’ are the reproductive caste of the species. These are responsible for producing eggs and are the only termites with well-developed eyes. 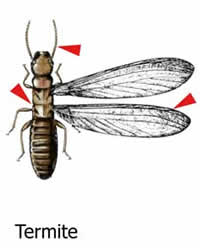 The termite queen has a great capacity to lay eggs and in certain species can also add extra set of ovaries to help produce more eggs. They are known to produce more than 2,000 eggs a day. The king termite grows only slightly larger after initial mating and continues to mate with the queen for life. Termites take flight in large numbers after the first rain and look for an appropriate site to build a nest. Once they have found an acceptable sight, they shed their wings, mate and start building a colony. Worker termites, foragers and soldiers can be both males as well as females.

Termites require habitats that are rich in soil and wood, while the colony is divided into different castes depending on the size of the individual termite. Nest workers are responsible for making nests by chewing into wood to create a proper nest for the nurturing of the young, while the foragers are responsible for finding food and the soldiers are guarding the home against attacks. The diet of termites includes high amounts of cellulose, which can be found in dry wood, timber, damp-wood, grass. Termites are usually classified together depending upon their diets.

The termites have soft bodies and are usually white in color, though the colors can differ depending upon the species. They do not have a distinct waist and have a more cylindrical, straight stature resembling small worms. They have straight antennae on their head and the fore-wings and the back-wings in the alate termites are equal in length. The termites also have small and sharp mandibles that are used to rip and break the wood.

Both ants and termites are considered as a pest if they infest the household and require external professional help in order to kill them. Termites are responsible for causing millions in wood damage each year, while ants disrupt living areas and food supplies.  Both the species are also considered as delicacy and are consumed in many countries.