Difference between Frown and Grimace

Key Difference: A frown is a simpler expression which most people instinctively know. It involves in the lips turning downward, and the furrowing of the brow. A grimace is usually characterized as an ugly, twisted expression on a person's face. The primary emotions that it expresses are disgust or pain. 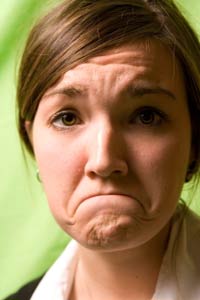 Frown and Grimace are two different facial expressions. They are very similar in nature, so much so that it is very easy to confuse the two. Both typically include the lips turning downward, common referred to as an upside down smile. However, the primary difference between the two expressions, and an important reason to correctly interpret them, is that they express two completely different emotions.

A frown is a simpler expression which most people instinctively know. Even small kids commonly frown. It involves in the lips turning downward, and the furrowing of the brow. In fact, Charles Darwin described frowning as the ‘furrowing of the brow which leads to a rise in the upper lip and a down-turning of the corners of the mouth’.

It should be noted that each of these two things can individually be referred to as a frown, or they both can be inferred as different aspects of a frown. Most people refer to the downturned lips as a frown, hence the expression ‘turn that frown upside down'. However, traditionally the term referred primarily to the furrowing of the brow.

A grimace, on the other hand, is something completely different. It is a more severe expression and is more complicated in the matter of the emotions it displays. Due to this, most kids don’t grimace very early on, but pick it up soon enough after they develop more complex emotions and after they start interacting more with other people. 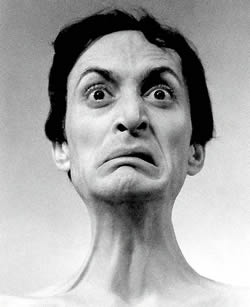 A grimace is usually characterized as an ugly, twisted expression on a person's face. The primary emotions that it expresses are disgust or pain. Alternately some people also express contempt or wry amusement, usually at the expense of others. Grimace is also often described as an attempt to smile when one is feeling upset, disgusted or hurt. This refers to the idea of trying to smile to mask your true emotions.

Keeping this in mind, it can be seen that a grimace is a more complicated expression than a frown. They are also categorized by different set of emotions; a frown showcases a displeasure, sadness or worry, whereas a grimace shows disgust, disapproval, or pain.

Comparison between Frown and Grimace: