Difference between Ghoul and Zombie

Ghoul and zombie are just folkloric creatures that are seen in literature and, more recently, in films. They both are flesh-eating creatures, but there are quite a lot of differences between the two fictional characters. Also see: Zombie Vs. Vampire 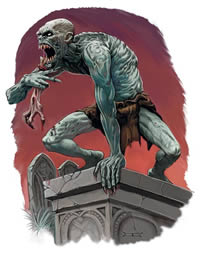 A ghoul is a folkloric monster or spirit, who dwells in graveyards and consumes human flesh; it is usually classified as undead. The term ‘ghoul’ was first used in English literature in 1786, in William Beckford's oriental novel ‘Vathek’, which describes the ‘ghūl’ of Arabian folklore, and the oldest book to mention ghouls is ‘One Thousand and One Nights’.

In stories, it is believed that ghouls are not humans or were humans, but they have transformed humans into ghouls. They are said to have animal-like or child-like intelligence, which means that they have thoughts and also a will of their own. They are said to feed on human carcasses and dead human beings or animals. They are said to generally thrive in cemeteries or the graves digging for the dead. Also, they are believed to be created by black magic or are possessed by some demon. Ghouls are attracted to the dead, but they may attack living beings. Also see Ghost Vs. Vampire

The term ‘ghoul’ is derived from the Arabic word ‘ghul’ which means to seize; this term was etymologically related to demons. However, the term ‘ghoul’ is considered derogatory, as it is usually used to refer to a person who delights in the macabre, or whose profession is linked directly to death, such as a gravedigger. 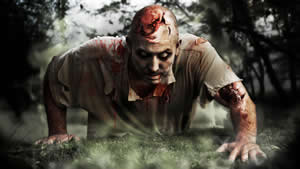 Zombies are fictional, undead creatures or people in an entranced state. Zombies became famous after George A. Romero’s film “Night of the Living Dead” (1968), and are still widely popular in modern fictions and horror films.

Zombies are considered as dead people who had come back to life or have a resemblance to it; they have no intelligence. They are considered as brain dead, decaying corpses that crave the human flesh and brains. It is said that if zombie bites or scratches another human, that person will turn into zombies as well. It is said to be a contagious virus. Also, zombies have no ability to speak or control their movements as the virus kills their brains. They are considered as foul creatures created by voodoo, and can be killed by a shot on the head. Also see Ghosts Vs. Demons

There also some popular beliefs such as the Zombie Apocalypse, where the society is broken down as a result of a zombie virus outbreak; then the zombies rise in full strength and retaliate on the human civilization, thereby slowly reducing the society into a scavenging pre-industrial hostile wilderness.

Comparison between Ghoul and Zombie: