Ever go to someplace new and notice that the skin starts to feel rough and dried out after showers or it takes too much soap to remove dirt from the skin or the water may even taste a little different? Well, that is because of water being hard. Another type of water is soft water. These two are distinctly different types of water.

Hard water is water that has a high mineral content, commonly magnesium and calcium. The water becomes hard when it picks up concentrations of magnesium and calcium when it flows among these rocks. The rocks are often soft which results in them being picked up by the water. Hard water is not harmful for consumption and National Research Council (National Academy of Sciences) claims that hard water can actually serve as a dietary supplement for magnesium and calcium. The hardness of the water is measured in levels, which is determined by the concentration of multivalent cations in the water. Multivalent cations are cations that have a charge greater than 1+. Cations found in hard water include Ca2+ and Mg2+. 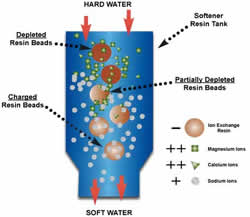 Soft water is water that has a higher sodium content and small concentration of calcium and magnesium. Soft water travels through hard rock such as granite and hence gathers only a little amount of minerals. The water is believed to be better on skin, clothes, dishes and things that constantly need washing; however it provides no extra benefits during consumption.

Hard water and soft water can easily be separated using a small observation. If while showering, the soap does not lather as much and leaves behind soap scum, most probably the person is bathing in hard water. Soft water does not leave residue behind and provides are luscious later. Hard water can also lead to calcification of faucets and pipes. In case a person does not wish to have hard water, the water can easily be softened using water softeners. Water softening appliances soften water by removing metal cations and replacing them with sodium or potassium ions. These appliances can be used in select places so that a person can use soft water for laundering and showering and hard water for consumption.

Thanks. I've cleared my doubt.

Thanku it really help me

But why does soft taste better than hard water?

it will add more sentence because easy to understand

I've always been confused by these differences. Thanks.

Thx it really helps for science

more differences are required but a nice article. it is very doubtful but nice explanation is given.

Not bad but give with full sentence