Difference between Hippie and Hipster

Key Difference: Hippie is a subculture that was popular during the mid-1960s and was originally a youth movement that rose in the United States during the Vietnam War. Hipster is a subculture that refers to a group of people that are value independent thinking, counter-culture, progressive politics, an appreciation of art and indie-rock, creativity, intelligence, and witty banter.

The terms hipster and hippie are popular terms that are often heard in daily conversation. These terms are completely different from each other and should not be interchanged. The term hippie was popular during the 1960s, while the term hipster has gained more popularity in the 1990s. 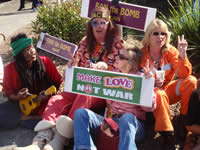 Hippie is a subculture that was popular during the mid-1960s and was originally a youth movement that rose in the United States during the Vietnam War, from where it spread all over the world. The term ‘hippie’ has been derived from ‘hipster’, which was used to refer to beatniks that migrated into San Francisco's Haight-Ashbury district. The derivation of the term ‘hip’ is unclear, while it is assumed to be taken from African American culture which denotes, "awareness”.

The hippies are popular for their dressing styles and music. They would dress in bright psychedelic colors, bell-bottom jeans and would wear clothes printed with peace signs (in order to protest the Vietnam War). They created their own communities, listened to psychedelic rock, embraced the sexual revolution, and used drugs such as LSD, or magic mushrooms. Hippies had a huge effect on the culture at that time and even influenced popular music, television, film, literature, and the arts. The hippies would roam from place to place and went on to search the meaning of life. They believed in being free from societal restrictions. Hippies commonly took up communal or cooperative living arrangements, adopted vegetarian diets and practiced holistic medicine. Signers such as Bob Dylan, the Beatles, Grateful Dead and the Rolling Stones were often associated with during those times.

The term ‘hip’ was coined during the jazz age to describe aficionados of the growing scene. However, some claim that the term was originated from ‘hop’, a slang word used for opium. Hipster is a subculture that started during the 1960s, but didn’t gain popularity until the 1990s. The term refers to a group of people that that value independent thinking, counter-culture, progressive politics, an appreciation of art and indie-rock, creativity, intelligence, and witty banter. Hipsters are generally middle-class people and can be found the Williamsburg, Wicker Park, Mission District, New York and other cosmopolitan cities. Hipsters are also linked with having a unique fashion sense and often reject mainstream clothing styles.

Hipsters are associated with darker clothes, skinny jeans, scarves and t-shirts that are found in thrift or vintage stores. They also associate old-school sneakers, and sometimes don thick rimmed glasses. They sport androgynous hair styles with shag or asymmetric cuts, with side bangs and mostly go for a messy look. Hipster often own degrees in liberal arts, mathematics or science. They are also prominently seen working in music and fashion industries. Hipsters shun the mainstream societal conventions of any kind and do not want to be influenced by mainsream advertising and media. Hipsters believe in concepts of androgyny and feminism, where huge, muscular men are not attractive to women compared to skinny guys. Hipsters are also very racially open-minded, and the greatest numbers of interracial couples in any urban environment are typically found within the hipster subculture. Hipsters have gained popularity in today’s world due to the technology such as photo-blog and social networking sites, which are making them prominent.