Difference between HTTP and WWW

Key Difference: Hypertext Transfer Protocol (HTTP) is an application protocol established to allow communication over the Internet. The World Wide Web (WWW or W3) is a system of linked hypertext documents that can be accessed via the Internet.

If a person looks at the URL of the website that they are currently on, they would see the terms HTTP or WWW. Anyone who ever worked on the Internet knows that websites usually begin with the terms www. HTTP and WWW are both related to the Internet but they differ from each other. While, HTTP refers to a protocol that is used by web browsers when accessing a website, www is a collection of hypertext documents are available for viewing via the Internet. Sir Tim Berners-Lee has been credited for successfully creating the Internet and the WWW.

Hypertext Transfer Protocol (HTTP) is an application protocol established to allow communication over the Internet. It is a set of rules that determine how web servers or other applications will communicate with each other over the Internet. It is said to act as the foundation of the World Wide Web. HTTP defines how the messages will be formatted and transmitted and how the web servers and browsers will respond when given a command. Hypertext is text that is displayed on a computer or any other electronic device and is referenced using hyperlinks, which can be easily and immediately accessed by the reader by clicking on the link. HTTP has become the global language to exchange hypertext information used by web servers and client computers.

HTTP was developed by a collaboration of the Internet Engineering Task Force (IETF) and the World Wide Web Consortium (W3C). The team published a series of Requests for Comments (RFCs) documents, which became the published document that listed all kinds of standards for the Internet. HTTP works as a request-response protocol in the client-server computing model. Let’s use a realistic example to make it simple. A person working on a computer opens a web browser, searches for ‘google.com’ and presses enter. The web browser forwards this request to the server where the page is stored. The server then replies to the request with completion status information as well as the requested content in the message body. The web page is then viewable to the user. HTTP is known as a stateless protocol because each command or request that is sent is executed independently and is not associated with the command that was executed before. In order to reduce the time it takes to fetch the data, web browsers use web caches and cookies to make it easier to find the pages that are visited frequently. Other protocols that are used on the Internet include File Transfer Protocol (FTP) and Network News Transfer Protocol (NNTP). 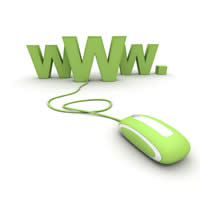 The World Wide Web (WWW or W3) is a system of linked hypertext documents that can be accessed via the Internet. WWW is also often referred to as the Web and wrongly used as a synonym for the Internet (they are different from each other). The hypertext documents, which in addition to text can also include images, videos, tables and other multimedia files can be viewed using web browsers such as IE, Chrome, Firefox, etc. The hypertext documents are often connected through a series of links, also known as hyperlinks. The pages can be navigated using these links. The documents are formatted in a markup language known as HTML (Hypertext Markup Language) and supports links to other documents.

The World Wide Web was originally a concept created by computer scientist Sir Tim Berners-Lee that allowed easy sharing of documents and other research. He was frustrated with having to access a variety of different serves in order to refer to other research and created the hypertext system known ENQUIRE to help make it easier to find the research he needed. The formal proposal for the World Wide Web was published on 2 November 1990 by Berners-Lee and computer scientist Robert Cailliau. The proposal defined using hypertext "to link and access information of various kinds as a web of nodes in which the user can browse at will.” Though originally, it was launched as a read-only web, it then slowly evolved to the web that allowed users to create and publish their own websites and the one we know now. The WWW uses client server architecture. It allows the client to access any documents that are stored in hypertext format on a server using an application, known as web browser. Though there is no clear distinction whether the www is actually required when trying to access a document, it is related to the internet where it is a norm to begin a website with www.

In simple terms, HTTP is the protocol or set of rules that define how the pages will be formatted and transferred when a request is sent from a client application (web browser) to the server. WWW is a set of consolidated set hypertext documents that are stored on the server which stores the information that users require access to. HTTP defines how the request will be transmitted to the server and how the server will respond, while www only deals with maintaining a linked set of hypertext documents. Both of these concepts together make up Internet and the rules that govern it. All these rules and documents are maintained by the World Wide Web Consortium (W3C).