Difference between Navy and Marines

Key difference: Navy is one of the branches of the armed forces. The navy is responsible for safeguarding the nation’s territorial water areas via lake-borne or ocean-borne combat operations. The Marines are a special branch force of the navy. They are trained and specialized to carry out amphibious or ground combat missions.

There are several branches that make up the United States armed forces. They are the Army, Navy, Marine Corps, the Coast Guard and the Air Force. The Marines and the Navy were officially established in 1775 by the Congress Party. All the five armed forces have different roles and responsibilities. The article differentiates between the navy and marines. 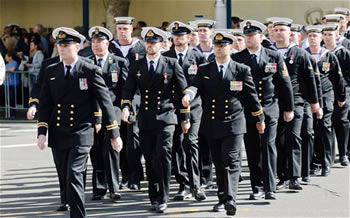 A navy or maritime force is a fleet of waterborne military watercraft. The primary role of the navy is to ensure that the seas are safe and free, which makes it easier for a country to make use of its water areas all the time. It consist of all the operations conducted by surface ships, amphibious ships, and submarines, etc. They also provide an additional support of communications, training, and other fields. Regarding the recent developments, the navy has been provided with a few space-related operations. The strategic task role of a navy is projection of force into areas beyond a country's shores, which basically means to protect sea-lanes, ferry troops, or attack other navies, ports, etc.

The Navy is also used as a supplement for the Air Force power, if and when the need arises during conflicting times. The navy ships can also be used to launch an attack on a land target from miles away, using very heavy guns and cruise missiles. Stealth attacks on enemy targets can also be carried out using the Navy submarines. Another primary function of the Navy is to transport Marines to the place of conflict. The Naval reserves will provide assistance to the Navy when it is required.

The Marines are a branch of the nation’s armed forces that specialize in amphibious missions. They are trained to capture and take control of ‘beach heads’, and to make an attack route that will enable assault on the enemy from almost any direction. The Marines were first established as a special side force for the Navy. In 1798, the Marine Corps were officially listed as a separate combat service. 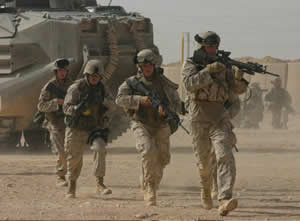 According to Wikipedia, the tasks undertaken by marines include 'providing protection from war while at sea, reflecting the pressed nature of the ships' company and the risk of mutiny.' Other tasks would include 'boarding of vessels during combat or capture of prize ships and providing manpower for raiding ashore in support of the naval objectives'. Marine elements would also contribute to the movement of on-shore, in support of the military objective.

The primary specialties of the Marine Corps were amphibious missions, but recently they were also required to take part in ground combat operations. They are basically a ‘lighter’ force than the army and that is the reason for their rapid deployment. During combat missions, the Marines are usually self-sufficient, with their own airpower that mainly comprises of fighter aircraft and attack helicopters. Even though this is the case, the Marines, to a large extent, are assisted by the Navy. They are assisted both logistically and administratively. For example, during combat, Marines have to reply on the doctors provided and trained in medicine by the navy.

While Marine Corps continue to be a part of the navy, they are an autonomous body with a different command system, different uniform, objectives and missions than navy. Marines do not enjoy being labeled as foot soldiers of navy. For example, in United States, the Head of US marine does not report to navy officials; he reports to the civilian secretary of the navy. As mentioned earlier, marines have different missions than from the navy, and an important part of their duty is to provide security to the all embassies of the country and military installations worldwide.

Comparison between Navy and Marines: