Difference between NFL and CFL

Key difference: NFL and CFL are both popular football sport leagues. The main differences between the two games are based on their game play, field size, ball size and different rules and regulations.

American Football and Canadian Football have both originated from Rugby. Rugby was introduced in Canada by the British Army soldiers, who were posted in Montreal. The soldiers organized games against the students of McGill University. In 1874, Harvard University invited McGill students to play their new game against Harvard students. As the rules of the Canadian game differed from the US games, both the teams decided to follow half US and half Canadian rules, resulting in many similarities between the two games. However, they still differ from each other in many ways. 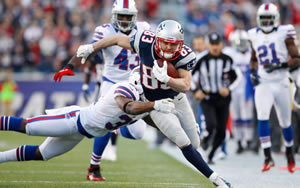 The National Football League (NFL) is a professional American football league that constitutes of the four major professional sports leagues in North America. It was formed on 24th June 1922 and is composed of 32 teams.

NFL is the highest professional level of sport in the world. It runs a 17 week regular season, where each team plays 16 games. Each game lasts an hour, and includes 11 players on a field at a time. The two teams line up opposite each other at the start of the game. The receiving player can either run with ball or pass the ball. Each team has to move the ball 10 yards in four down, if they fail the ball is given to the opposite team, if they pass they get another chance to move the ball for another 10 yards. The objective of this game is to score points by carrying the ball to the opposing team’s end zone. The other ways to score points is by kicking the ball into the opposing team’s goal post, catching a pass thrown over the goal line, tackling and opposing ball carrier in his end zone. 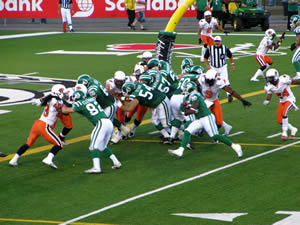 The Canadian Football League (CFL) is a professional sports league located in Canada. The CFL is the highest level of competition in Canadian football. It was founded on January 19, 1958 and is composed of 9 teams.

It is a 20 week regular session, where each team play 18 games with two bye run weeks. Here, each game lasts about an hour and includes 12 players on the field at a time. The game starts with a team being in possession of the ball, the offence, while the team defending the ball is defense. The play begins with a backward pass through the legs by a member of the offense to the team’s quarterback. The quarterback has a number of options: he could run with the ball, drop-kick the ball, pass the ball, hand off the ball, punt the ball, or throw the ball. Each play is considered as a down. The offense must advance 10 yards towards the defense’s goal posts within 3 downs, or they have to forfeit the ball. The objective of the game is to score points in various ways such as carrying the ball past opposition touch line, kicking the ball through uprights or by failure of a team to advance ball out of own end zone.

Comparison between NFL and CFL: