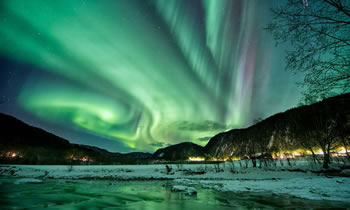 In fact, even their scientific names denote that.  The lights are named as aurora after the Roman goddess of dawn, Aurora. This is due to the fact that the lights look like the approaching dawn. The second part of the name, Borealis comes from the Greek name for the north wind, Boreas. Hence, Aurora Borealis literally means the North Dawn. The name was picked out for the phenomenon by Galileo in 1619.  Similarly, ‘australis’ is a Latin word meaning Southern, or of the South; hence, the Aurora Australis or the Southern Dawn.

While the lights are a natural phenomenon, there is no magical, supernatural, or religious annotations to it as humans had believed for millennia before. In fact, there is a straightforward scientific explanation for the phenomenon. These auroras occur due to solar flares, also known as solar winds. When these solar winds reach Earth, they can destroy it with their extensive heat and with the speed and energy that they approach with. In order to protect itself, the atoms in the atmosphere absorb the heat and impact of the solar particles. By doing so, they enter an exited state. When they return to normal, they release the excessive energy in the form of visible photons. These photons are what we see and name as auroras. 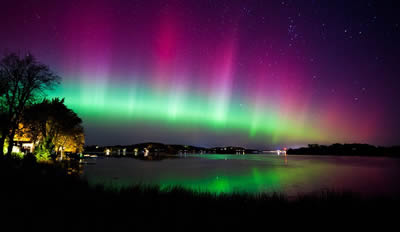 The Northern Lights come in various different colors, such as but not limited to red, green, yellow, pink, purple, blue, as well as ultraviolet and infrared, which are not visible to the naked eye. These colors depend on the atoms that are releasing the photons. The most common is the green aurora, which is due to the participation of the oxygen atom.

This phenomenon of the lights does not only occur on Earth. The auroras in fact occur on any and all planets that have magnetic poles. The magnetic pull brings the photons to lower latitudes, hence making it further visible. The Northern Lights occur at the North Magnetic Pole of Earth. They are most commonly visible from Canada, Alaska, Greenland, Northern Russia, and Northern Scandinavia.