Difference between Ozone and Greenhouse Gases 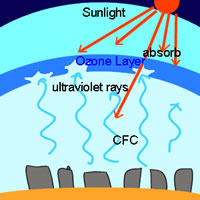 Global warming has been an ongoing debate for a number of years. While it is a scientifically proven fact that global warming is currently happening and that it is cause for concern, many people including politicians refuse to acknowledge reality.

Essentially, global warming is when the average temperature of the Earth's atmosphere and oceans increases. The temperature has been steadily increasing since the late 19th century and has already increased about 0.8 °C (1.4 °F). While, the number may seem indifferent, its large scale impact is definitely not. The primary reason for the temperature increase is the Earth's dwindling ozone layer and the increased concentrations of greenhouse gases in the atmosphere.

Ozone (O3) is a molecule made up of three oxygen atoms. It is formed from dioxygen (O2) molecules by the action of ultraviolet light and atmospheric electrical discharges. Ozone is always present in the Earth's atmosphere in low concentrations. In fact, it makes up 0.6 parts per million of the atmosphere. This presence of ozone in the Earth’s atmosphere is referred to as the ozone layer.

The ozone layer is mainly found in the lower portion of the stratosphere from approximately 20 to 30 kilometers (12 to 19 mi) above Earth. Its main responsibility is to act as a filter for ultraviolet rays that enter the Earth’s atmosphere. It absorbs between 97% and 99% of the Sun's medium-frequency ultraviolet light; that is from 200 nm to 315 nm wavelength. In case these ultraviolet rays reach the earth’s surface, they have the potential to damage life forms.

Greenhouse gases, on other hand, are gases that are present in the atmosphere. Greenhouse gases, commonly abbreviated as GHG, are necessary for life as we know it. Without the presence of GHG the Earth's surface would be about 33°C colder than the present average. Earth's surface currently averages about 14 °C (57 °F). If the Earth was cooler it would not be able to sustain vegetation and the life as we know it would be very different on planet Earth.

However, when the heat is increased the oven gets hotter, eventually it is too hot and it burns the food. Same concept applies to Earth. When there is a high concentration of greenhouses gases in the atmosphere, more of the heat is trapped, hence effectively increasing the heat of the Earth’s surface.

The increase of the Earth’s average temperature has led to a significant impact on Earth. It has led to the melting of the polar ice caps, rising sea water, increasing frequency of tsunamis, increased flooding, and many more. Unless the concentration of greenhouse gases in the atmosphere can be contained, in nor reduced, the Earth’s climate will continue to get worse.