Difference between PMS and Pregnancy Symptoms

Key Difference: Premenstrual syndrome (PMS) is a collection of physical and emotional symptoms that a woman experiences after she reaches puberty and her menstrual cycle starts. For many women early pregnancy symptoms are similar and in many case exactly the same as PMS symptoms. 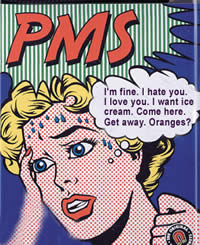 Premenstrual syndrome (PMS) is a collection of physical and emotional symptoms that a woman experiences after she reaches puberty and her menstrual cycle starts. This is around the time of 13; however it could be earlier or later depending on hormone changes in her body. During PMS a women experiences various symptoms that could last the whole menstrual cycle or roughly the first couple of days. The symptoms are expected to interfere in daily activities depending on the person. The intensity of the symptoms also varies women to women.

For many women early pregnancy symptoms are similar and in many case exactly the same as PMS symptoms. These symptoms also tend to differ from women to women, along with the intensity of the symptoms. While some women claim, they felt no different than their regular self, others claim that their conditions varied from time to time and their symptoms were intense. The most common symptom of pregnancy includes missed period, which indicates that a women might be pregnant, after which she can take an at home pregnancy test or seek a medical professional to be sure.

As you can see the symptoms for both conditions are really similar, with a few variations such as missed periods, increased urination, melasma, etc. The main indictor of pregnancy is a missed or period. Also when women experience PMS symptoms it usually means that the menstrual cycle starts. So, the PMS symptoms usually occur after the periods have started or are about to start. If the symptoms occur and the menstrual cycle has not started or does not start, it could also be another indicator of early pregnancy symptoms. PMS symptoms can be relieved by using prescribed medicine from the doctor, which should not be used in case a woman is pregnant. While PMS symptoms usually go away after a woman’s menstrual cycle is over, pregnancy symptoms continue to occur in various frequencies until the child is born.