Difference between PuTTY and Telnet

Key Difference: Telnet is a network protocol which supports remote logins to computers through the internet. PuTTY is a free implementation of SSH and Telnet for Windows and Unix platforms. Both the terms may also be used in context to terminal emulation programs; PuTTY emulation program is considered to be more simple and secure in comparison to the standard Telnet program that comes along Windows.

Telnet is a network protocol which supports remote logins to computers through the internet. However, It also supports several other features. The term Telnet stands for Telecommunication Network. It provides the facility to the user to establish a TCP connection to a login server or terminal server at some other side. Generally, it listens on TCP Port 23. This protocol is based on three concepts –

Network Virtual Terminal defines the facilities through which communication is established with the involvement of TCP/IP protocols. Network Virtual Terminal comprises of features like - 7 bit ASCII characters to which the extended ASCII code is added, three control characters and five optional control characters. The advanced function can be availed by using form of options according to the negotiated options principle. The rules of negotiations deal with avoiding the wraparound situations.

Telnet is acclaimed for being the original internet when the internet first got introduced in 1969. It is a text based computer protocol. The screen of the Telnet program is not fancy like the other browser screens. The basic specifications of the Telnet protocol are present in RFC 854, while the many options are described in RFCs 855 to 861. Telnet can also be described as an Internet standard utility or terminal emulation program for TCP/IP networks. 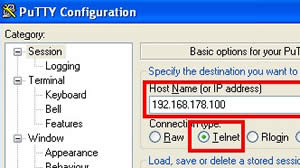 PuTTY is a free implementation of SSH and Telnet for Windows and Unix platforms. According to Wikipedia the name "PuTTY" has no definitive meaning, though "tty" is the name for a terminal in the Unix tradition, usually held to be short for Teletype. PuTTY was written and is maintained primarily by Simon Tatham. It assists in the establishment of a secure connection over the internet. It does not require installation. It has numerous options of tweaking connections, sessions, window’s appearance, etc.

It is an open source software and is easily available with its source code. It provides a range of customization options related to the display configurations. Five basic communication protocols provided by PuTTY are Raw, Telnet, Rlogin, SSH and Serial. PuTTY and Telnet are associated to each other, as Telnet is a network protocol and PuTTY is a client program that supports Telnet along with SSH and Rlogin network protocols. However, in context to emulation programs, PuTTY is considered to be simpler and secure than Telnet.

Comparison between PuTTY and Telnet: