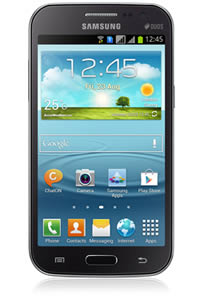 The phone is a quad-core smartphone aimed at the budget segment.  Samsung Galaxy Win or Samsung Galaxy Grand Quattro runs on Android 4.1 (Jelly Bean) which is powered by 1.2GHz Quad core Qualcomm MSM8625Q Snapdragon 200 Processor and 1 GB of RAM.

The user interface is that usual Samsung TouchWiz, however it has the additional Motion UI. The Motion UI allows user to control certain features on the phone by moving the phone a certain way. An example would be flipping the phone to face downward will mute the incoming call. The device also has an Easy Mode that helps the user access key functions such as favorite contacts, apps, dialer, etc on the homescreen with ease.

The device features a 4.7 inch WVGA TFT LCD screen with a resolution of 480 x 800 pixels. It also has a 5 Mega pixel rear-facing camera with LED Flash and auto focus, as well as a VGA front facing camera. The phone also has additional camera features such as Continuous Shot, Best Photo, Color Effect and Scene Mode.

The information for the detailed table about the two phones has been taken from the Samsung website and GSMArena.com.