Difference between Single and Double Quotes 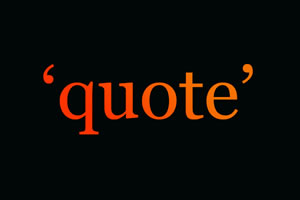 Quotation marks, also known as inverted commas are punctuation marks that are placed on a side of a word or speech in order to identify it as a quotation, direct speech or a name. The quotation marks can also be used in order to place emphasis on a particular word or phrase or to even indicate irony.

Certain people claim that double quotations are used to indicate proper speech that is written as true as possible, while single quotations are used to place emphasis on certain words or to express irony. However, this is again left at the disposal of the author. According to the rules of grammar, there is no such distinction made between the two. One thing that having two types of quotation marks have enabled us to do is to indicate a quote within a quote. For this purpose, the person must decide which quotation mark they want to use on the outside and which one on the inside. Example includes: “Why did he call me a ‘traitor’?” or ‘Mary yelled at him to stop “fooling” around!”

What one must remember is that quotations always comes in pairs, so if a quotation is used it must have an opening pair, something that indicates where the text that the author wishes to mark starts and another to indicate where that text ends. There are also two types of font in quotes: curly or typewriter. Curvy text or smart text has a small curve that ends with a dot, while typewriter ones are straight lines. The closing single quotation mark is identical or similar in form to the apostrophe and similar to the prime symbol. However, these three characters have quite different purposes. The double quotation mark is similar to—and often used to represent—the ditto mark and the double prime symbol.