Difference between Sonos and AirPlay

Key difference: Sonos is a consumer electronic company of audio equipment, which allows online streaming of music through their wireless HiFi music system. AirPlay is an application created by Apple Inc. that allows wireless streaming of music, photos and videos together between devices. 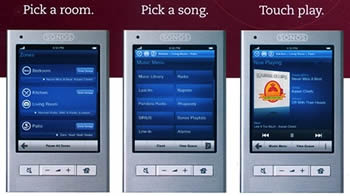 According to Wikipedia, the Sonos Wireless HiFi System allows the streaming of music from internet sources in multiple rooms via wi-fi (802.11m), within a range as specified by the wi-fi. The range can also be extended by adding a wireless bridge for continuous online music streaming. Applications are available for the control systems in Android, iOS platforms and Kindle Fire. The Sonos Music System has two main types of players: all in one speakers and components. The components can directly be connected to un-powered speakers, to an amplifier or a receiver, which allows the existing speakers to become Sonos rooms. The all-in-one speakers allow any room with a power outlet to play audio. There is also a wireless Subwoofer that easily connects to all-in-one speakers or the amplified component. Multiple elements in a single household can be connected to each other on a proprietary synchronous mesh network using the AES encryption. This network is called as SonosNet, which allows music to be played simultaneously in separate zones. SonosNet provides a complete robust connection. The result of this technology is that every Sonos player has to constantly keep up a wireless connection, even when in standby mode or connected by cable. Sonos devices do not have power buttons to switch on or off.

Zone players are output required for streaming audios. Later, the zonebridge was introduced; it allows the wireless internet connection for the SonosNet network in locations where utilizing of zone players is not possible. The ZoneBridge is quite cheap as compared to ZonePlayers. A single ZonePlayer or ZoneBridge must be wired to a network for accessing to LAN and Internet music sources.

This system comes with Desktop Controller software which runs on Mac and Windows computer. There is no supported controller developed for Linx computers. The Controller for iOS is a free application that allows the device to become a controller for Sonos via an existing home wireless network. The app supports all generations of iPhone, iPad and iPod Touch. It the same android controller application used for an android device.

This system uses a CIFS (Common Internet File Sharing) system or a NAS (Network Attached Storage) drive for streaming music to a stereo. The NAS provides a computer free solution for accessing music. It can stream music in a multi-room in many formats including MP3, AAC, Ogg Vorbis, FLAC up to 16 bit / 44.1 kHz. With a proper broadband connection, the system can access a variety of audio content completely independent of a computer. It can easily connect with thousands of radio stations and shows from the Internet via TuneIn. 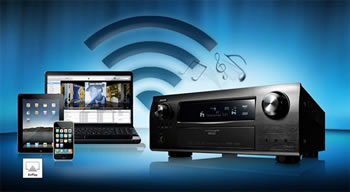 In 2010, Apple Inc introduced Airplay as a wireless streaming modus operandi to all its products, which took the markets with a storm. It was a new range of speakers, AirPlay, which could easily enable any Apple device to stream music to or from any supported unit. It was previously known as Airtunes. AirPlay allows wireless streaming of audio, videos and photos together with related metadata between devices.

AirTunes was originally introduced in 2004, it would help stream music from mobile device. AirPlay is an upgraded version, which could easily stream all kinds of media anywhere in the house. It could be done wireless and securely without any need for cables. There are two types of AirPlay devices: those that send audiovisual content and those that are capable of receiving content and rendering it on displays and speakers. According to Wikipedia, the sender devices include computer running iTunes, and iOS devices such as iPhones, iPods, and iPads. The receiver device includes AirPort Express, an audio output connector, Apple TV, and third party speakers. With the open source implementations of the AirPlay protocol any computer can now be turned into an AirPlay receiver. AirPlay wireless technology (receiver mode) is integrated into speaker docks, AV receivers, and stereo systems from companies such as Philips, Marantz, Bowers & Wilkins, Pioneer, Sony, and Denon. Song titles, artists, album names, elapsed and remaining time, and album artwork can appear on AirPlay-enabled speakers with graphical displays.

AirPlay allows an Apple TV or AirPort-enabled computer with a music player to send a stream of music to multiple stereos connected to an AirPort Express. The speakers attached to it can be selected from within the “Remote” iPhone or iPod touch application, allowing full AirPlay compatibility.

Airplay protocol uses UDP (User Datagram Protocol) for streaming audio and is based on RTSP (Real Time Streaming Protocol) network control. The streams are transcoded using the Apple Lossless codec with 44100 Hz and 2 channels encrypted with AES, requiring the receiver to have access to the key to decrypt the streams. The stream is buffered for approximately 2 seconds before the playback begins, resulting in a small delay before the audio is played after starting an AirPlay stream. The protocol supports metadata packets which determine the final output volume on the receiving end. This makes it possible to send audio data unprocessed at its original full volume, preventing sound quality deterioration. It also makes the streaming possible of one source to multiple targets each with its own volume control.

AirPlay Mirroring is a slightly different technology that allows specific content to be broadcasted from a variety of iOS devices and iTunes to a second generation Apple TV.

Comparison between Sonos and AirPlay: