Difference between Soy and Whey Protein

Soy and whey protein are protein supplements that can be taken if one is not meeting their recommended protein intake from their diet. They are also quite often taken by body-building enthusiasts, as they help increase muscle mass, and by athletes, who have the need for a higher protein intake.

Protein supplements are available in three forms, animal protein, whey protein and soy protein. Animal protein comes from processed animal fat, and is not generally recommended due to its high cholesterol content. The more popular and healthier protein supplements are soy and whey. Soy is a plant protein, which is extracted from soybeans. Whey is extracted from cow’s milk.

Soy protein is quite popular with vegetarians, as well as with those who are lactose intolerant or allergic to cow’s milk. It tends to contain less saturated fat than whey protein, and is considered to have numerous health benefits. Soy protein can help improve the health of women following menopause, as well as help prevent certain types of cancer. It is also credited with reducing blood cholesterol levels and some types of cardiovascular diseases. It also tends to accelerate the nutritive value of the foods in one’s diet.

However, soy protein contains phytoestrogens. Phytoestrogens bind to estrogen receptors and increase the amount of estrogen in the body. Estrogen is known to inhibit muscle building in the body to some extent. Due to this, a number of bodybuilders avoid soy protein.

Whey protein also has a number of nutritional benefits to both athletes and those involved in bodybuilding, such as assisting in maintaining the proper weight, having antibacterial and anti-viral properties, improving the function of the immune system and the digestive system, improving blood pressure and athletic performance, reducing gastric mucosal injury and liver damage, as well as reducing the symptoms of Chronic Fatigue Syndrome. 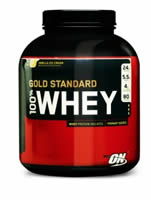 According to the Center for Disease Control, consuming too much protein can be unhealthy for a person. Too much protein in one’s diet can lead to weight gain, kidney problems and heart disease. Due to this, one should get a professional opinion of a nutritionist before incorporating either soy or whey protein in one’ diet.