Key difference: Nowadays, Soybean and Corn oil are regarded to be the healthiest and most essential type of cooking oils. These oils are obtained from their respective sources like soybean seeds and germ of corn (commonly known as maize).

All natural oils have their own qualities and properties in themselves which makes them different from one another. Today, oils are becoming a part of health and diet trends, and hence there’s always been a tough competition when it comes for selecting the appropriate oil in concern of health factor. Oil as an ingredient, is a blend in itself with all of its natural and physical components.

In order to keep the wheels of life moving, being healthy and eating fresh is an important factor. Which is why, having an appropriate type of oil has become the basic necessity in today’s stressful life. Being healthy is directly proportional to the consumption of fat free food. And, among the various oils, soybean and corn oils are considered to be the fat free types of cooking oils, due to which these oils have been replaced with the other cooking oils in many kitchens. 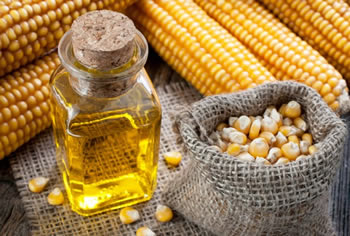 Corn oil is obtained from the germ of corn (maize). At its prior stage, the oil so obtained is in its crud form, after wards, fat free acids and phospholipids are removed with an appropriate refining method. As the oil is relevant for absorbing high heat, it is applicable in cooking for frying techniques. Today, corn oil has become a choice of replacement due to its fat free functionality. It has an exceptional flavor, economy, and health benefits. The oil possesses a concentrated source of energy of essential fatty acids and Vitamin E and rich polyunsaturated fatty acids.

Corn oil components regulate the body cholesterol level and lower the elevated blood pressure level. The oil can replace a significant amount of saturated fats in several food items; also it has the ability to reduce the trans fat factor. The oil has greater applications in the snack food industries. The Corn oil can be inter-esterified with fully hydrogenated vegetable oil to produce trans free margarines. The oil is also a source for biodiesel. Industrially, the oil is used in soap, salve, paint, rust proofing for metal surfaces, inks, textiles, nitroglycerin, and insecticides. It is also sometimes used as a carrier for drug molecules in pharmaceutical preparations. 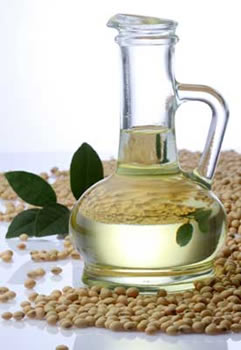 Soybean oil extracted from soybean seeds is regarded to be the one of the healthiest oils. The oil is proteins rich and fat free type of oil. It is best known for its shortening usages, in cooking and baking techniques. The oil is clean and natural in taste; it is high in poly- and monounsaturated fats and low in saturated fats and trans fat-free. The oil has an extra impressive quality of adapting to the taste of any respective food in which it is used.

Due to these compositions, soybean oil is known for its healthy heart-benefits. The oil has a wide application in the complementary food items like that of mayonnaise, salad dressings, frozen foods, imitation dairy and meat products and commercially baked goods. It can be also used in the old-fashioned pie crust or blended with flavored vinegar for a new dressing. Soybean oil is processed to form drying oil, which is further used in the applications of printing inks (soy ink) and oil paints.

Both oils have their unique features in themselves; viz. soybean oil is tasteless, and is considered to be adaptable to the flavors in which it is used, while corn oil is smoke resistant and also have discoloration ability. These features make these oils different from one another. Also, both oils are rich sources of linoleic acid and have polyunsaturated fats in common. The corn oil contains tocopherols among its components, which function as antioxidants and provide a good source of Vitamin E. The soybean oil has the ability to breakdown the toxic products when taken to high heats.