Key Difference: VGA, HDMI, USB, SATA, and Ethernet are just some of the different types of Computer Cables. They each have their own uses and are essential for the successful performance of any computer. 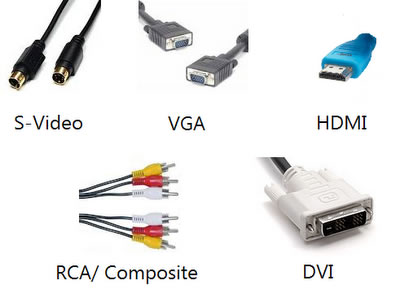 Today’s world in an electronic one; no matter what, it is important to be connected at all times. Being connected means that you need to have all of your hardware in check, which means that all the hardware should be checked and properly attached to each other via cables. This is a task that is easier said than done. Each piece of hardware seems to need a different kind of wire, and it is all one can do to not lose their mind trying to figure it all out.

Here are some of the wires that are commonly used:

This is the cable that is often used to connect a CPU to a display. The cable has 15 pins in all that are arranged in 3 rows with 5 pins on each row. Each row transmits a different color channel: red, green, and blue.

The VGA was first used in the 1980s and used an analogue connection to transmit picture. It became the standard cable to connect a monitor to a CPU. However, as it often happens, technologies evolved. Now, it is generally accepted that a digital connection is a far better way to transmit pictures, which is why many computers have an alternative port such as DVI or HDMI. Yet, CPUs will still often have a VGA port and many people do still use it.

DVI was the natural progression of transmission from VGA. Unlike, VGA, DVI used a digital interface to transmit images. This meant that DVI could be used to connect digital displays such as LCDs, which were much better and sharper and of generally better quality that the CRTs, which were the previous norm.

In addition, DVI was also backward compatible, which meant that people could continue using it with VGA technology, hence not requiring a complete overhaul of all current hardware. DVI connectors generally come in 3 varieties:

DVI-I: Can transmit both analog and digital.

In certain cases, a VGA-to-DVI or DVI-to-VGA converter cable can be used in case the hardware is not compatible. This allows one to continue using an older piece of hardware with a newer one without shelling out money to get all new compatible hardware.

VGA and DVI were both eventually overtaken by HDMI. While both VGA and DVI continue to be in use, the popularity of HDMI is constantly on the rise. HDMI uses a purely digital connection, however, the advantage of HDMI is that is transmits both video and audio signals together, which make is much more versatile than its predecessors. It also provides the best quality between the three. However, HDMI is not backward compatible, which means that it cannot be fully used with previous technologies, yet there is a HDMI-to-VGA converter available that barely gets the task done.

Type A: Has 19 pins and is the most popular HDMI out there. Is compatible with single-link DVI-D connections.

Type B: Has 29 pins and hence is larger. Is compatible with dual-link DVI-D connections.

Type C: Also has 19 pins and is commonly used with portable devices, such as camcorders and digital cameras.

Type D: Also has 19 pins and looks similar to a micro-USB cord.

USB can be dubbed as the single most popular cable in computing. It is used to connect nearly every common device from the likes of mice, keyboards, to printers and cameras, as well as flash drives, wireless adapters, etc.

USBs come in many different varieties, including micro USB, mini USB, type B standard USB, and type A standard USB. The mini USB is the most commonly used one, however, micro USB has garnered a lot of popularity, mainly because it the port used in most smartphones today.

USBs have gone through three main versions: USB 1.0/1.1, USB 2.0, and USB 3.0. USB 1.0 is the slowest of the three with USB 3.0 being the fastest. Currently, USB 2.0 is the most popular and commonly used version; however USB 3.0 is gaining momentum and is now being used specifically for storage devices, in order to transfer date quickly.

IDE cables were once used to connect storage devices to a motherboard. However, today they have nearly been phased out and are rarely used. The IDE ports typically had 40 pins in two rows; however, the smaller IDE had 44 pins.

SATA is what replaced IDE. Today, SATA is commonly used to connect hard drives to the motherboard. A SATA cable has 7 pins and is shaped like an L. As compared to its predecessor IDE, SATA provides higher data transfer speeds.

eSATA is nothing more than an extension of SATA. Like SATA, it is used to connect hard drives to the motherboard. However, eSATA is commonly used to connect external hard drives and optical drives. Both, SATA and eSATA provide faster data transfer speeds as compared to its alternatives FireWire and USB.

Cat 5: most common and most popular. Provides speeds of either 10 Mbps or 100 Mbps.

Cat 6: The newest and the faster of the three. Supports speeds of up to 10 Gbps.

These are the most common types of computer cables. Nearly every computer uses most of these cables, or at least a type of them.