Key difference: The Maruti Suzuki 800 and the Hyundai Eon are both predominant hatchback cars, which are produced and sold in India. They differ in terms of their performance, engine capacity, transmission, etc. 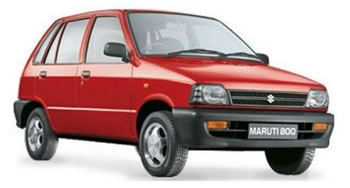 Maruti Suzuki 800 was first launched in the year 1983 and since then has gone on to become one of the most sold cars in the world. The 800 was one of the very first hatchback cars to be sold in Asian countries such as India, Nepal, Pakistan, Bangladesh and Sri Lanka. The car features a decent 796 cc engine, which is run only on petrol, with a mileage of 16.1 kmpl. Accommodating four persons at once, the 800 facilitates manual transmission using four gears. Having seat upholstery made out of artificial leather, the 800 doesn’t provide the standard conventional features such as an anti-lock braking system, airbags, central locking, alloy wheels, etc. It would be a major folly on one’s part to expect modern provisions from a traditional machine like the 800, especially at the price at which it is marketed. However, the 800 still proves to be a cheap and viable means of transportation that promises reasonable performance, along with a happy nostalgia of one's yesteryears. 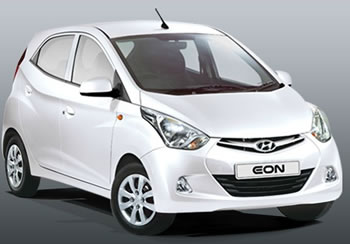 The Hyundai Eon is a smartly designed hatchback variant, which is specifically targeted at the transportation needs of an upper middle class, or a middle class family. Manufactured in collaboration with the South Korean Hyundai research and development center, the Hyundai Eon has its production base in Chennai, India. The car was launched on 1 October 2011 in India, March 2012 in the Philippines, and June 2012 in Vietnam. The car is exported to a few other Southeast Asian countries as well, from the Chennai plant itself. Packing in a decent amount of standard features such as an 814 cc engine, 21.1 kmpl mileage capacity and a five-gear manual transmission system, the Eon is competitively priced in many car markets around the world. Apart from its jazzy presentation, the Hyundai Eon also delivers some top notch car aspects such as power steering, remote controlled central locking system, provision of airbags, power windows, and a fully fabric seat upholstery. However, a significant downside for Hyundai with this car is that the mentioned features do not make the cut in its basic models. Regardless of this one shortcoming, it can be said that the Hyundai Eon is indeed among a consumer’s best bet, especially in the hatchback section.