Difference between Aerobic and Anaerobic Respiration 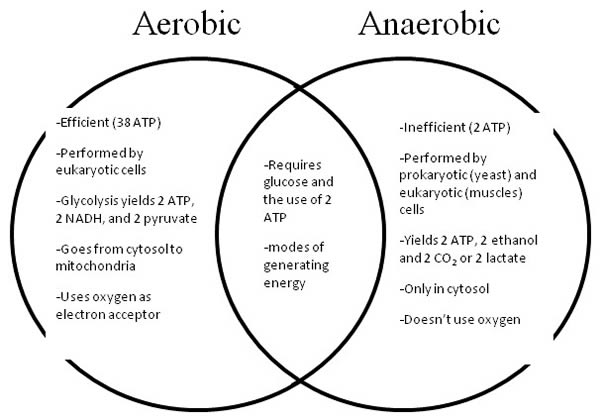 The term aerobic is most commonly heard when referring to exercises but not many people know that the exercise is named ‘aerobic exercises’ because of the type of respiration process used when the exercise is performed. The term goes deeper and refers to aerobic and anaerobic respiration.

Respiration is the process through which energy is released by breaking down glucose in the body. The energy produced is used by the body for various purposes including working the muscles, keeping body temperature constant, allowing chemical reactions to take place, sending messages throughout the body, etc. There are two types of respiration that happen within all living things: aerobic respiration and anaerobic respiration.

Aerobic respiration is the process of breaking down glucose using oxygen. The cells use glucose and oxygen to produce carbon dioxide, water and energy. This energy produced is then reserved until required by the body. This process is responsible for producing most of the energy in the body and can release approximately 2900 kJ/mol of glucose broken down. The released energy is used to make a special energy molecule called Adenosine triphosphate (ATP). ATP is where the energy is stored for use later on by the body. The process is pretty much the same for almost all living things, but is reversed in plants. The plants use carbon dioxide and water to produce glucose and oxygen.

At rest our body works with aerobic respiration, but there are many times where oxygen is not available and yet the cell needs to survive. In humans, this event occurs when a person performs extraneous exercises. When doing an intense workout, the lungs and heart cannot pump blood and oxygen fast enough to keep up with the requirements of the cells. When this happens, the body cannot simply stop making energy.

In such an event, the body produces glucose by using catalysts such as nitrate. These release a by product of lactic acid and energy. The lactic acid causes the muscles to tire quickly producing fatigue in the body and can even cause cramps. Hence, the vigorous exercise cannot be maintained for more than a few minutes. The body needs to consume more oxygen in order to breakdown the lactic acid inside the body; this is known as oxygen debt.  In plants, the process is a little different. When glucose is broken down in plants using anaerobic respiration, it produces a by product of ethanol, carbon dioxide and energy.