Key Difference: Apple Watch is the long awaited smartwatch by Apple. Pebble Steel is a smartphone watch created by Pebble Technology and the only watch that supports both iOS and Android. 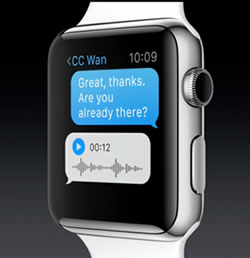 The Apple Watch is the long awaited smartwatch by the iPhone makers. As expected, it supports only iPhones, that too models iPhone 5 and up. Pebble Steel is a standalone smartwatch and the only smartwatch that is compatible with both Android and iOS.

Apple has unveiled the Apple Watch after many speculations and has created a sort of miniature smart phone that can be worn on the wrist. The Apple Watch hits the market in early 2015 and is available in two sizes and three editions. It also allows users to purchase different color straps in different materials, in order to customize it as they please. The screen blackouts in order to save battery, but if the wrist is turns or lifted, the screen pops up and shows the time. The watch only works with the iPhone line and supports models 5 and above.

Apple Watch offers some pretty cool features such as customizable watchfaces, digital crown for navigation purposes, ability to make and answer call directly on the watch, without having to bring out the phone, draw and send messages, different vibration patters for different tasks, payment via watch facility and Glances (a notification center that is visible when the screen is pushed up).

Apple has made customization and accessibility its core focus when creating the Watch. It is also able to communicate with the iPhone in order to get other information such as GPS location, etc. The phone also places importance on health and fitness and also incorporates a feature that will let the user to he/she has been sitting for a while and they should stand up. Navigation also gets easier as Apple Watch allows navigation by touchscreen, digital crown and voice assistance. 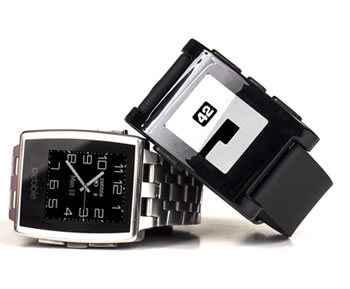 It is simple in looks and offers a low-resolution screen. It performs the primary function of a watch and constantly has the time clearly visible on the screen. The Pebble Steel does not offer touchscreen but rather opts for buttons to navigate the watch. It comes with two bands, leather and metal both of which look sleek and does not look out of place. The screen remains on at all times to display the clock and is protected using the Corning Gorilla Glass. At night, it offers a backlight feature or the phone comes on at a light shake of the wrist.

One of the most important feature that none of the other smartwatches have been able to replicate is the waterproof feature. The watch can be taken for a swim or a shower. It is waterproof for up to 50 meters. Although, it does not have the ability to reply using the watch, it does shift all notifications from the phone to the watch. The person can view and dismiss the notifications, without having to remove their phone. Silent alarms can also be set on the phone, so that it will buzz and only wake the wearer.

A step back to this smartphone is the lack of inbuilt storage system. While smartwatches offer upto 4GB, Pebble Steel can only offer storage for 8 apps at a time. The rest can be saved in the Pebble app on the phone and is easily swappable. The battery of the smartwatch can last up 4-5 days, on a single charge. Again, one should remember that Pebble Steel touts itself as a smartphone assistant, rather than a mini smartphone.